REGINALD’S WALTZ. Canadian, Waltz. D Major. Standard tuning (fiddle). AB. A popular “contest” waltz in the Western United States and in Canada where it was popularized by both Don Messer and Andy DeJarlis. The tune was composed in the mid-1960’s by Canadian Reg Bouvette (1923-1992), a fiddler in the Western Canadian/Métis style. He recorded this tune as a single in 1967, and later on his first album (1974). Bouvette was born near Winnipeg, Manitoba, and began playing at age ten. His father and older brother were both fiddlers, and he absorbed much muci at home and at local dances and events. Bouvette ran a trucking business, but in the early 1970's he sold it to devote full-time to his music. He had a regular half hour spot on Winnipeg’s CKFB radio, in the time spot following his friend, Andy DeJarlis’ show, and played other radio and television dates, as well as a steady schedule of live appearances for which he traveled widely. Bouvette was a four-time Manitoba fiddling champion who participated and judged numerous fiddle contests, including judging occasionally at Weiser. 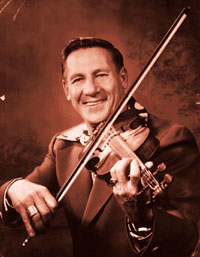