Find traditional instrumental music
This is the stable version, checked on 3 March 2021.
Jump to: navigation, search

REIDY'S REEL. Irish, Reel. G Major (‘A’ part) & D Major (‘B’ part). Standard tuning (fiddle). AB. The tune is printed by Breathnach (1963) who identifies it as a variant of “Spike Island Lasses (1)” family of tunes, though he thinks the second phrase of the second strain belongs to “Bank of Ireland (1) (The).” O’Neill (1922) remarks: “’Reidy's Reel’ is named after a North Kerry fiddler from whose playing our liberal contributor Mr. Stack learned it in his youth. Altho' reminiscent of other tunes in certain phrases, ‘Reidy's Reel’ was until recently a stranger to Chicago musicians.”


Source for notated version : - Patrick Stack [O’Neill]. Chicago fiddler Patrick Stack made several recordings with piper Eddie Mullaney in the 78 RPM era. Stack was born in North Kerry but emigrated to the United States in his teens. It was Stack into whose hands the Irish Rice-Walsh manuscript devolved, which contains portions of the repertoire of North Kerry fiddle master Jeremiah Breen. Stack loaned it to O'Neill, who garnered a number of tunes from it for his Waifs and Strays (1922). He was a regular on the "Irish Hour" on WCFL in the 1930's in Chicago. 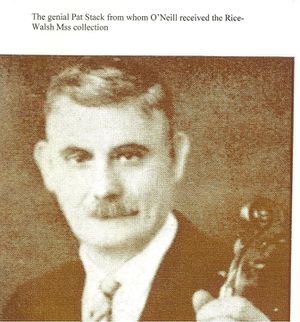