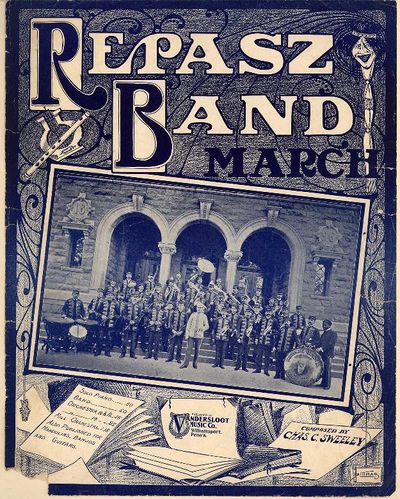 "Repasz Band March" was the name of a popular 6/8 time march and two-step that was probably composed by Harry J. Lincoln, a composer known for his many marches, although it has also been attributed to Charles G. Sweeley. Both have also been credited with arranging it, although Wikipedia gives that Sweeley merely bought the rights to the piece. It was written in 1901 for the the Repasz Band of Williamsport, Pa. (Lincoln's home town), now the oldest brass band still in existence, formed in 1831. In 1861, the Band enlisted in the 11th Regiment, Pennsylvania Volunteers, and after three months of service, enlisted in the 29th Pennsylvania Volunteers. After the Band completed its second enlistment, the greater part of the musicians next enlisted in the 8th Pennsylvania Cavalry and served until the end of the Civil War, seeing action in the Shenandoah Valley, as well as at Lee’s surrender. At Appomattox Court House they played the “Star Spangled Banner” and “Rally Round the Flag” alternating with a Confederate Army Band who played “Bonnie Blue Flag” and “Dixie.” 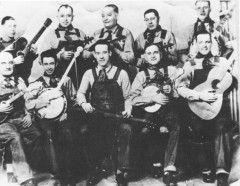 H. M. Barnes and His Blue Ridge Ramblers recorded the tune in New York in 1929. The large touring Barnes band (whose members hailed from East Tennessee) consisted of fiddlers Dad Williams, Fred Roe and Jim E. Smith, with banjo player Jack Reedy, guitarist Henry Roe, mandolin player Harry Brown, and steel guitarist Frank Wilson. Barnes himself was from Philadelphia, and was the group's business manager and leader but was not a musician. The band was active in the East Coast Loews Vaudeville Circuit during the late 1920s and early 1930s, with various personnel. Charlie Bowman and his daughters Jennie and Pauline Bowman joined the band in 1929. However, the Blue Ridge Ramblers recording was not the first country music recording of the march, for it had been recorded for Gennett Records by Charles W. "Big Red" Tweedy (of the West Virginia based piano and fiddle duet The Tweedy Brothers) as a piano solo in a June, 1924, session in Richmond, Indiana. The recording was issued in the Tweedy Brothers name. Green's String Band also recorded the march in a 1930 Richmond, Indiana, session, also issued on some labels under the 'Green's Sting Band' name, but on the Superior label (Superior 2575) as Dave Dawson's String Band. Tony Russell lists the Kentucky band's personnel as Preston Green (double bass), A. Judson Green and Herman Green (fiddle), and Ila Bassett (guitar).

The Gennett catalogue (Gennett 7286) also lists a "Repasz Band March" by Mcguire & Harkam (or Harkamp), recorded in 1929-30 (backed with "Sharpshooter's March"), their only recording.