REUBAN('S TRAIN). AKA - "Old Reuban," "Ruben (2)." Old-Time, Song and Breakdown. USA, North Carolina. D Major/Mixolydian. One part. "Reuban" or "Reuban's Train" is a widespread American banjo song/tune recorded often in the 78 RPM era, although versions can vary greatly. Frank Proffitt pronounced it as "one of the oldest simple banjo tunes...it was the first tune generally learned...There are about fifty different verses to this, as everybody added them all along" [Warner]. It was the first tune that Mt. Airy, North Carolina, fiddler and banjo player Tommy Jarrell learned, from a hired-hand named Cockerham on his father's farm. In 1982 he told interviewer Peter Anick that Cockerham played the tune, handed Jarrell the banjo and invited him to play it. Jarrell at first demurred saying he couldn't play the instrument, upon which the hand replied, "Well, it ain't but one string to note and I'll show you that." Jarrell, familiar with the song from the singing of other family members, worked it out in a few minutes. Laurel Bloomery, Tennessee, fiddler Gilliam Banmon Grayson's 1927 tune "Train Forty-Five" (Victor 21189, 1928) derived from “Reuban’s Train.” Grayson (1887-1930) was originally from Ashe County, North Carolina. Similarly, Piedmont musician John Vestal started playing banjo at the age of seven or eight (before taking up the fiddle), and remembered the "first tune I ever played was 'Old Reuban.' My mother learnt me to play that" (around 1920) [Carlin, String Bands in the North Carolina Piedmont, 2004, p. 24).

The old-time song/tune "Keep My Skillet Good and Greasy" is also a related melody, as is "Vestapol," "900 Miles" and bluegrass musicians Flatt & Scrugg's "One Hundred Miles" or "Hundred Miles (A)." 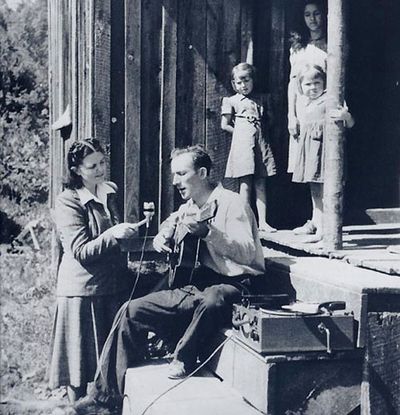 Old Reuban's comin' down the track,
He has got the throttle back,
The rails are a-carryin' me from home. ....(Frank Proffitt)