Find traditional instrumental music
This is the stable version, checked on 26 September 2022.
Jump to: navigation, search

Back to Richmond Blues 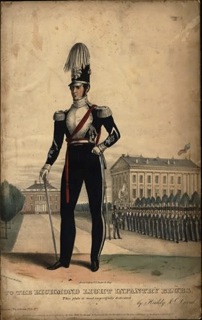 RICHMOND BLUES. AKA and see "My Love is but a Lassie Yet (1)," "Love Somebody (2)," "Too Young to Marry (1)," "Sweet Sixteen," "Yellow Eyed Cat," "Chinky Pin," "Midnight Serenade (1)," "Fourth of July," "Buffalo Nickel (1)," "Hair in the Butter," "Farmer Had a Dog (The)," "Ten Nights in a Bar Room," "Lead Out," "Darling Child," "I'm My Momma's Darling Child." American, Reel. The melody appears under this title in George P. Knauff's Virginia Reels, volume II (Baltimore, 1839, No. 9, p. 7). The title probably commemorates the Richmond Light Infantry Blues, of Richmond, Virginia, and not the mounted militia unit the Richmond Blues, based in Augusta, Georgia. The former was also called the Richmond Blues, for short. The unit from Richmond, Virginia, (“the Pride of Richmond and the glory of Virginia,” as one newspaper hailed them) were formally commissioned in 1789, and, like many milita units of the day, functioned as a social society as well as a military unit. In the first half of the 19th century the Blues sported rather gaudy uniforms with foxtails and leopard skins adoring their hats along with a badge, cockade and black feather plume. The unit paraded in Richmond four times a year; one of the times was on the Tenth of May (the anniversary of its founding), which was additionally celebrated every year with an anniversary ball, one of the highlights of the city's social season. Later, the Richmond Blues saw service in every conflict war, although the elite company was usually absorbed into larger units during wartime (in the Civil War they were with Wise’s Brigade). Chris Goertzen, in his book George P. Knauff's Virginia Reels and the History of American Fiddling (2017, pp. 58-59) sees a balancing of titles in Knauff's pamphlet of nine tunes, juxtaposing "Petersburg Ladies" with "Richmond Blues."

The melody, however, was originally that of a very popular Scottish air and reel usually appearing as "My Love She's but a Lassie Yet" in British Isles and often by sources in Canada and the northern U.S. As an old-time dance melody it is popular under the titles “Too Young to Marry (1)” and “Sweet Sixteen” in the southern Piedmont region and elsewhere in the South. Jim Taylor (1995) says the tune (under all of its various titles) was a favorite among military fifers in the Civil War.

Back to Richmond Blues