Find traditional instrumental music
This is the stable version, checked on 29 March 2021.
Jump to: navigation, search

Back to Ride Old Buck to Water

RIDE OLD BUCK TO WATER. AKA and see "Hell Broke Loose in Georgia (3)," "There's no Hell in Georgia." Amerian, Song and Reel (cut time). A Major. AEae tuning (fiddle). AB. "Ride Old Buck to Water" was recorded in 1930 for Columbia Records in Atlanta, Ga., by the North Georgia group The Skillet Lickers [1]. The group's personnel changed from time to time over a ten year recording career, but the line up for this tune was Clayton McMichen, Bert Layne and Lowe Stokes on fiddles, Riley Puckett, vocals and guitar, and Gid Tanner on banjo. Puckett sang brief couplets in the first strain of the tune in between instrumental portions: 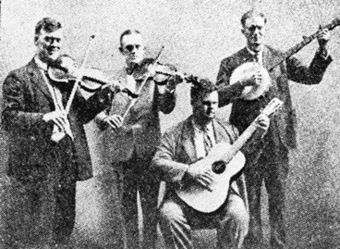 Saw him down at the foot of the hill,
If he ain't come back I'd a-been there still.

Ride Old Buck to the halter,
Sold, for a dollar and a quarter.

Cognate tunes are "Hellbound for Alabama," recorded twice for OKeh records in the 1920's by another north Georgia band, Fiddlin' John Carson and the Virginia Reelers, and "There's no Hell in Georgia" by Luke Hig(h)night's band (1929).

See also listing at :
Hear the Skillet Lickers' recording on youtube.com [2] and at Slippery Hill [3]
Hear a 1989 field recording of Kentucky fiddlerTommy Taylor by John Herrod at Berea Digital Content [4]

Back to Ride Old Buck to Water