Find traditional instrumental music
This is the stable version, checked on 28 June 2020.
Jump to: navigation, search

Back to Ridotto al Fresco

According to Sir John Hawkins in his General History of Music (1776), the term Ridotto al Fresco refers to the name of an event in the early history of Vauxhall, then known as Spring Garden: 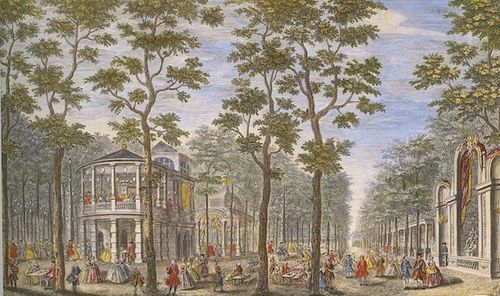 Vauxhall. Handel's statue is at the extreme right of the picture.

About the year 1730, Mr. Jonathan Tyers became the occupier of [a house], and, there being

a large garden belonging to it, planted with a great number of stately trees, and laid out in shady walks, it obtained the name of Spring Gardens; and the house being converted into a tavern, or place of entertainment, was much frequented by the votaries of pleasure. Mr. Tyers opened it with an advertisement of a Ridotto al Fresco, a term which the people of this country had till that time been strangers to. These entertainments were repeated in the course of the summer, and numbers resorted to partake of them. This encouraged the proprietor to make his garden a place of musical entertainment, for every evening during the summer season. To this end he was at great expense in decorating the gardens with paintings; he engaged a band of excellent musicians; he issued silver tickets at one guinea each for admission, and receiving great encouragement, he set up an organ in the orchestra, and, in a conspicuous part of the garden, erected a fine statue of Mr. Handel.

Playwright Theophilus Cibber (1703-1758) used the term in the title of his "grotesque pantomime entertainment" The Harlot's Progress; or, The Ridotto al'fresco, performed in 1737 by His Majesty's Company of comedians at the Theatre-Royal in Drury-Lane.

Back to Ridotto al Fresco