Back to River of Ponds

RIVER OF PONDS. Canadian, Jig. Canada, Newfoundland. D Major. Standard tuning (fiddle). AA’BB’. Composed by the Newfoundland musician Rufus Guinchard (1899-1990) of Daniel's Harbour, from the northern peninsula. River of Ponds is a village in Newfoundland, nearby. 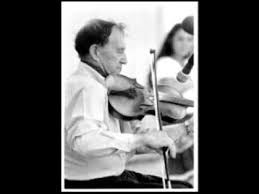 Guinchard played the violin in an odd postion, resting on the right side of his chest, with the bow held far up the shaft from the frog (as can be seen in the photograph at right). He picked up the violin at an early age, and the position was his adaptation for playing a full size instrument, but it was a playing habit that stayed with him throughout his lifetime.

Back to River of Ponds