Back to Road to Batoche

ROAD TO BATOCHE, THE.' Canadian, Reel (cut time). E Dorian. Standard tuning (fiddle). Attributed to Métis fiddler Andy DeJarlis (Manitoba). The Métis are Native Americans of mixed English, French and Native American descent, who were originally trappers and woodsmen involved in the fur trade in the 19th century, where they came in contact with the music of British traders and storekeepers. The Métis fiddling tradition retains both Scottish and French elements in a Native American context, and tunes are improvisational and often irregular. DeJarlis's recording has tom-tom drumming introducing and ending the tune. 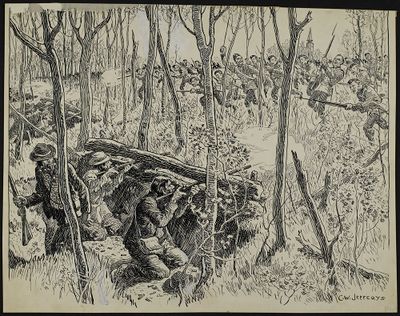 Bayonet charge at the Battle of Batoche

Batoche was the provisional capital declared during the Northwest Rebellion of 1885, led by Louis Riel (1844-1885), who had hoped to unite Métis, Cree and Anglo settlers in an independent state. Riel had originally been elected to articulate their grievances to the Canadian government, but instead chose to try a military solution. His united front never materialized, however, and became largely a rebellion of the Métis and Cree. After some initial victories Riel and his forces were defeated in the Battle of Batoche, north of what is now Saskatoon, Saskatchewan. Riel was captured and executed in November, 1885, by the Canadian government of Prime Minister John A. MacDonald.

Back to Road to Batoche