Find traditional instrumental music
This is the stable version, checked on 16 November 2021.
Jump to: navigation, search

ROBBIE TAMSON'S SMIDDIE [1]. AKA - "Robin Tamson's Smiddy." English, Air (4/4 time). E Dorian. Standard tuning (fiddle). One part. "Robbie Tamson's Smiddie" was composed by Alexander Rodger (1784-1846), and was one of his most popular songs. "The Radical Poet," as he was called, was born at East Calder, Midlotian, but was taken in by family friends in Glasgow when his father's business collapsed, forcing him to flee aborad. Rodger spent some ten years in the army, and afterwards immersed himself in radical politics, narrowly avoiding transportation for his work. The song begins: 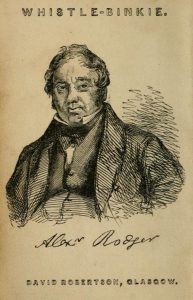 Me mither mend’t me auld breeks,
But ay! but they were diddy;
She sent me to get shod the mare
At Robbie Tamson’s smiddie.
Now t’ smiddie lies ayent the burn
That wamples thro’ the claughin’
And ne’er a time I pass that way
But aye I fall a-laughin’.

The song was recorded by the Tannahill Weavers, who used a different melody in 6/8 time (a variant of "Piper o' Dundee (The)").

Source for notated version: - The song and air were collected by Lucy Broadwood in the early 20th century from Mrs. T. H. Farrer, who had learned the song in Canada from a Mr. Richard Turner.