Find traditional instrumental music
This is the stable version, checked on 13 June 2019.
Jump to: navigation, search

Back to Robertson County

ROBERTSON COUNTY. American, Reel (cut time). USA, Tennessee. G Major. Standard tuning (fiddle). AABBBB. Does not seem to be the same as the similarly titled "Robinson County." Robertson County is in Tennessee, just north of Nashville. The tune may have been an original by Paul Warmack )1889-1954) and his Gully Jumpers [1], a popular 1920’s Nashville area string band, although it is related to "Throw the Old Cow over the Fence." The group (whose name was suggested by Grand Ol' Opry founder George D. Hay) featured Tennessee fiddler Charlie Arrington (1893-19??), who later accompanied Uncle Dave Macon in 1936 and 1937 in performances and on recordings. 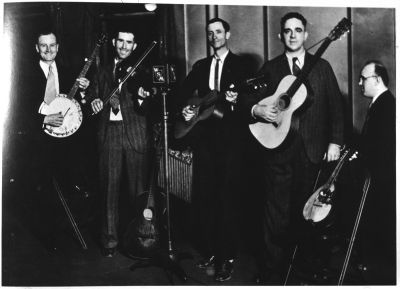 Warmack and Arrington left the band, and the lineup changed over the years, but the group continued in successive iterations until the 1970's, although they never repeated the success of their early years. In 1928 the band appeared on the Grand Ol' Opry stage more than any other stringband.


See also listing at:
Hear Paul Warmack and His Gully Jumpers' recording on youtube.com [2] and at Slippery Hill [3]

Back to Robertson County