Find traditional instrumental music
This is the stable version, checked on 16 October 2021.
Jump to: navigation, search

Back to Robinson's Tune 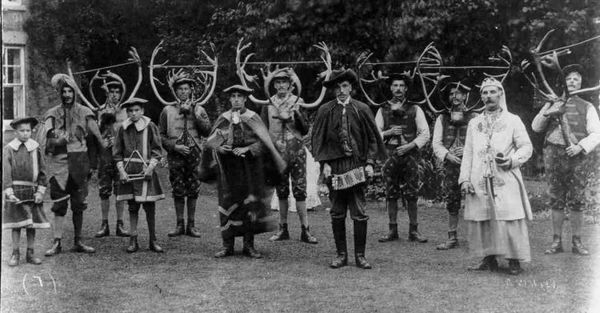 Abbots Bromley Horn Dancers, early 20th century.
ROBINSON'S TUNE. AKA and see "Abbot's Bromley Horn Dance." English, Dance Tune (6/8 time). G Minor. Standard tuning (fiddle). AB. One of the tunes associated with the ritual horn dance from the village of Abbots Bromley (Staffordshire), written c. 1700. "It was sent to (British folksong collector Cecil) Sharp in 1910 by a Mr. Buckley, an Abbots Bromley resident who noted the tune in 1857 or 1858. He learned it from William (or Henry) Robinson, the town's wheelwright and a very good fiddle player. While he never played for the dance, he was the only one in the village who remembered the tune, which he said was still used when he was a young man. We know that Robinson was born in the 1790's, because his sold his shop in 1878 while he was in his eighties. Robinson indicated that the tune was ancient in his day. However, because of technical aspects of the tune, doubt has been raised as to the authenticity of Robinson's tune as an early horn dance accompaniment (see particularly Cawte, pp. 78-79)" [Bullen, 1987].

Other tunes have been played for the horn dancing at Abbots Bromley, including "Yankee Doodle" (to the dismay of some in the early 20th century). See note for "St. Anne's Tune" for more information.

Back to Robinson's Tune