Back to Rochester Schottische (2)

ROCHESTER SCHOTTISCHE [2]. AKA and see “Birdy in the Treetop," "Cat Clumb Up the Plum Tree Schottische," "D and A Schottische," "Helvetia Polka," "Hi-Lo Schottische," "Jack Clumb Up the Plum Tree," "Military Schottische," "Poor Uncle Davy," "Sparrow in the Treetop (The),” "Texas Schottische," "Patrick County Blues," "What the Devil Ails You? (2)." American, Schottische. USA; southwestern Pa., Michigan. D Major ('A', 'B' and 'C' parts) & G Major ('D' part) {Ford}: D Major {Bayard}: D Major ('A' part) & G Major ('B' part) {Bayard}: D Major ('A' part) & A Major ('B' part) {Bayard}. Standard tuning (fiddle). AB (Bayard): ABC (Bayard): AABCD (Ford). A very popular and best-selling schottische from the mid-19th century. Seattle fiddler and musicologist Vivian Williams writes: “’Rochester Schottische’ was written in 1852 by William H. Rulison, who went to California for the Gold Rush, actually made some money (unlike most!), returned to his hometown of Rochester, NY, and opened up a music store.” Alan Jabbour (in notes to Henry Reed's version of "Rochester Schottische (2)" [1]) gives: "Rulison was apparently a music master from upstate New York, for in one sheet music edition he dedicates the piece to his students in Buffalo and Rochester." 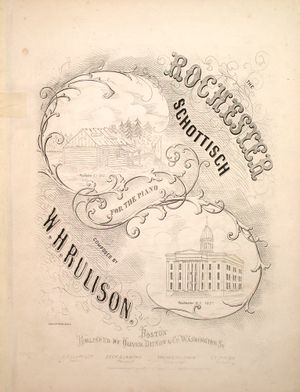 An 1857 publication from Oliver Ditson, Boston
It has not been possible to find any other pieces where W.H. Rulison is listed as composer. The name 'W.H. Rulison' is mentioned only once in Richard H. Lansing's article "Music in Rochester from 1817 to 1909" [2] (from an address to the Rochester Historical Society in January, 1909). He is identified only as a player of a "Basso Bomberdone" in one of the 1840's military-style brass bands in the city. The famous "Rochester Schottische" is not mentioned in the article at all.

The schottische entered traditional fiddle repertory where it acquired a variety of titles. It was known from tradition by Buffalo Valley, Pa., region dance fiddler Harry Daddario in the mid-20th century, and to Michigan fiddlers [3] around the same time (some of whom called it “Cat Clumb Up the Plum Tree” and “What the Devil Ails You?”). Glen Lyn, southwest Virginia, fiddler Henry Reed played a version of this tune as an untitled "Schottische"

The dates for William Rulison (1822-1864) have been given by one reference on the internet. There was a Dr. William H. Rulison who is buried in Oswego County, New York, with those dates, who served in the American Civil War with the Army of the Potomac as Medical Director of the Calvary Corps. He was mortally wounded by a sharpshooter at Smithfield, Va., in August, 1864, and, as he lay dying, requested Gen. George Armstrong Custer to write his mother. So far, there is nothing to suggest he is the same William H. Rulison who was the composer of "Rochester Schottische".

Back to Rochester Schottische (2)