Back to Rocky Road to Dinah's House

ROCKY ROAD TO DINAH'S HOUSE. Old-Time, Breakdown and Song. The tune was recorded in August, 1924, by Fiddlin' Cowan Powers (1877-1953) and his family band, from Russel County, southwest Va., for Victor Records, however, the side was not issued by the company. It was issued after the family [1] (Cowan Powers, fiddle; Orpha Powers, mandolin; Carrie Powers, guitar; and Ada Powers, ukelele) re-recorded the song in New York (actually East Orange, New Jersey) for rival Edison Records on October, 7th, 1925. Musicologist Gus Meade grouped the tune with "Fly Around My Pretty Little Miss" (Skillet Licker's version), "Georgia Wagner," and Fiddlin' John Carson's "Mammy's Nanny Goat." 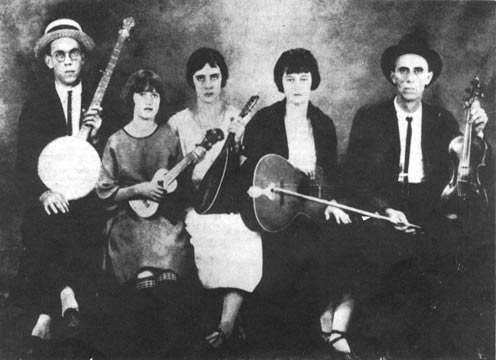 Powers sang on the recording:

Rocky old road to Dinah's house,
I ain't got long to tarry;
I'm goin' back to see her again
But she don't want to marry.

CHORUS:
Swing low, swing tall,
Swing that gal from Arkansas.
Take a drink of liquor and promenade all,
Throw that calico 'round the wall.
Swing them up and swing them down,
All night long we'll swing them around.

???
???
Hug and kiss that pretty little girl,
Long as she stays single.

Back to Rocky Road to Dinah's House