Find traditional instrumental music
This is the stable version, checked on 30 June 2022.
Jump to: navigation, search 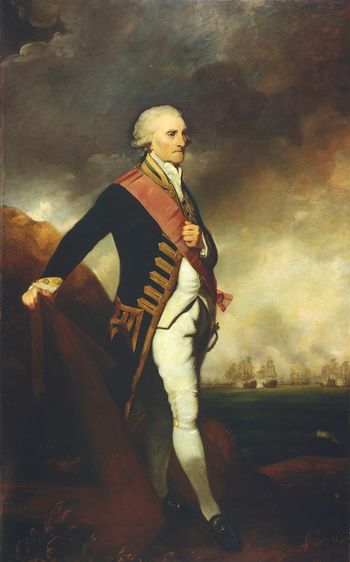 The title "Rodney's Glory," explains O'Sullivan (1983), was derived from verses by the poet Eoghain Rua Ó Súilleabháin in 1782, set to O’Carolan’s tune. The song commemorates a naval battle fought that year in which George Rodney (d. 1792), then vice-admiral of Great Britain, encountered a French fleet under Admiral Comte De Grasse. "The Battle of the Saints" or “Les Saintes” (named after Les Isles des Saintes, in the West Indies between Guadeloupe and Dominica), as the engagement was called, was one of the most important sea battles in wooden-ship history. Rodney’s thirty-three ships broke in two places the French line-of-battle of thirty-seven ships of the line, when, after the fleets had nearly passed each other on opposite tacks, a change of wind favored the British. The result was the capture of the French flagship and admiral along with five other ships. It was to be the final battle of the War of the American Revolution, and, strategically, although it did not negate Washington’s victory at Yorktown it did preserve Britain’s West Indian territories. Rodney was rewarded with a peerage although he came in for criticism for not following up his initial victory with the destruction of the remainder of the French fleet. Ó Súilleabháin served on The Formidable, a ship which saw some of the severest fighting and thus “Rodney's Glory" is a first-hand account of the battle.

O’Neill (1913) believes the long-dance to be simply a direct adaptation from the song (see “Rodney's Glory (2)”). “Rodney’s Glory” is included in a list of favorite set-dances in O’Keeffe and O’Brien’s Handbook of Irish Dance (O’Neill). See also the closely related tune "Gaelic League March (The)."

Éamon Kelly (Foreword, Stone Mad for Music, 1999) states that poet and folk hero Eoghan Rua (who died in 1784) is still an important figure in the Sliabh Luachra region of County Kerry that was his home. His verses are remembered, as was his voice which is said to have been sweet, melodious and eloquent. Kelly recalls:

Though the neighbouring men sitting around my father’s fire when I was small knew no Irish they had a wealth of stories about Eoghan Rua. It seems he was one day going to Cork and outside Millstreet a school-master picked up something from the road and said to Eoghan, ‘Look at that, I am in luck for the day—I found a horseshoe.’ ‘No doubt,’ Eoghan remarked, ‘education is a wonderful thing. I wouldn’t know whether that was a horseshoe or a mare’s shoe.’

The parish priest calling out the names of those who hadn’t paid their dues enquired, ‘Where is Eoghan Ó Súilleabháin?’ Eoghan answered and the priest asked, ‘Are you Eoghan a’ Dirrín?’ ‘Ní mé,’ arsa Eoghan, ‘ach Eoghan a’ bhéil bhinn.’