Back to Rosalie the Prairie Flower

ROSALIE THE PRAIRIE FLOWER. AKA – “Northumbrian Schottische.” American, English; Air, Barn Dance and Schottische. D Major. Standard tuning (fiddle). AB. The melody was composed by songsmith George F. Root (1820-1985), a prolific mid-19th century composer in Massachusetts and New York of minstrel songs, patriotic anthems (“The Battle Cry of Freedom,” “Tramp, Tramp, Tramp”) and heart songs. He penned “Rosalie the Prairie Flower” in 1855, prior to the American Civil War, under the name G.F. Wurzel (wurzel is the German name for ‘root’) about the passing of a child. It was popularized on the minstrel stage by Christy’s Minstrels, and eventually sold 100,00 copies. It ends: 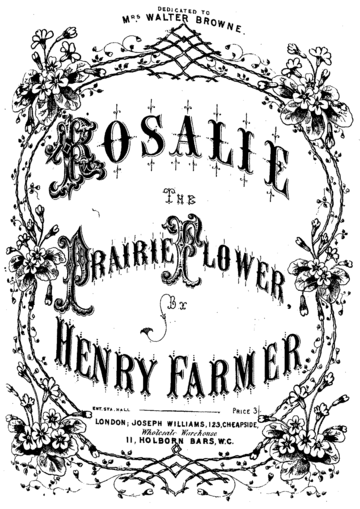 But the summer faded, and a chilly blast
O’er that happy cottage swept at last,
When the autumn song-birds woke the dewy morn,
Little prairie flower was gone;
For the angels whispered softly in her ear,
“Child, they Father calls thee, stay not here,”
And they gently bore her, robed in spotless white,
To their blissful home of light.

Of this period of his career Root himself said in this autobiography The Story of a Musical Life (1891):

I saw at once that mine must be the “people’s song,” still, I am ashamed to say, I shared the feeling that was around me in regard to the grade of music. When Stephen C. Foster’s wonderful melodies (as I now see them) began to appear, and the famous Christy’s Minstrels began to make them known, I “took a hand in” and wrote a few, but put “G. Freidrich Wurzel” to them instead of my own name. “Hazel Dell” and “Rosalie, the Prairie Flower” were the best known of those so written. It was not until I imbibed more of Dr. Mason’s spirit, and went more among the people of the country, and was thankful when I could write something that all the people would sing.

The air, a schottische or Barn Dance, was picked up by musician in the north-east of England, played as an instrumental.

Back to Rosalie the Prairie Flower