Find traditional instrumental music
This is the stable version, checked on 18 May 2021.
Jump to: navigation, search 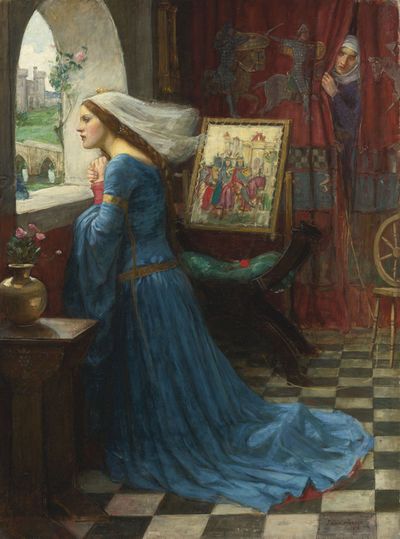 King Henry the Second lived in Woodstock Palace with Queen Eleanor, his wife, who, though Queen of England, was never queen of his heart. Henry loved Rosamond, the daughter of Earl Clifford, and to have her near him, he had build for her in the forest surrounding the palace a tiny house, over which the vines and shrubbery were trained to grow, till, in time, they hid it, and the king named the retreat "Fair Rosamond's Bower." Near the bower, and reached by stone steps, which also were hidden from view by overgrown shrubbery, there was a spring of crystal water which flowed into a pool, used by Lady Rosamond for her morning bath.

From one of his rooms in the palace the king had dug out an underground passage through which he could go part of the way to the retreat of Rosamond. From the underground passage he emerged into the forest, and through the maze from the passage to the bower, Rosamond had twined a silken thread in and out among the trees so that her royal lover might thus be guided to her abode. So years passed till one day Queen Eleanor discovered the underground passage and determined to go exploring through the forest for a rival she had sometimes suspected, though never found. At the end of the passage she stumbled upon the silken thread, and, following it, made her way to Rosamond's bower, taking with her a cup of poisoned wine and a dagger. Rosamond, running forth to meet her king, faced an angry queen instead.

"Choose which way to die!" cried Queen Eleanor, holding out the poisoned cup and the dagger, and Rosamond, fairest of all the daughters of England, and beloved of the king, drank the poisoned wine. Then the queen departed, and King Henry, following again the silken thread, came upon fair Rosamond, dead among the flowers, a wreath of roses on her head--the wreath with which he had crowned her, and the king's heart was broken.