ROSAMOND’S POND. English, Country Dance Tune (cut time). D Minor/F Major. Standard tuning (fiddle). AABB. The melody is from Thomas Bray’s Country Dances: Being A Composition Entirely New (London, 1699), a volume dedicated to Prince William, the Duke of Gloucester. Bray was a choreographer and dancer who worked in the theatre, often with dancers from France, and many of his dances may have been composed for performance. 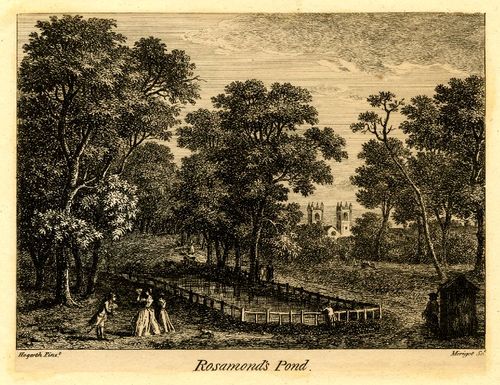 Rosamond's Pond was located in a secluded spot in the southwest corner of St. James's Park, London, a short distance from Buckingham House, the residence of Queen Charlotte that later became known as Buckingham Palace. It was made to receive the water of a small stream which trickled down from Hyde Park. The aforementioned Duke of Gloucester went on a hunt in 1698 soon after Christmas and "finished the day at Roasamond's Pond."

Rosamond's Pond was famous as a trysting place for lovers, and is often mentioned in period theatrical production as a place of assignation for married ladies with fashionable roués. However, the pond also had a darker reputation as the place where scorned and jilted lovers went to commit suicide by drowning themselves. So frequent was the practice that in 1770, soon after the purchase of Buckingham House by the Crown, the authorities felt compelled to fill it in to extinguish the practice,