Rose of Allandale (The)

Find traditional instrumental music
This is the stable version, checked on 19 February 2021.
Jump to: navigation, search

Back to Rose of Allandale (The)

ROSE OF ALLENDALE, THE. English, Air (whole time). C Major (Howe/Accordeon): D Major (Howe/Companion, Sumner/Gibbons). Standard tuning (fiddle). AABB. The provenance of the song "Rose of Allendale" [Roud 1218] is sometimes credited to Ireland or Scotland, but the air and song is associated with north of England where Allendale is a town in Northumberland, north-east England. Rather than a traditional piece, it is a composed parlor song by Charles Jeffreys, set to music by Sidney Nelson in the first half of the 19th century. Dating the piece is uncertain: it was printed in England in Blake's Young Flutist's Magazine in 1833, and was included in New York music publisher Edward Riley's Flute Melodies, vol. 4, dated 1826. The first stanza and chorus (in the Copper Family's version) go: 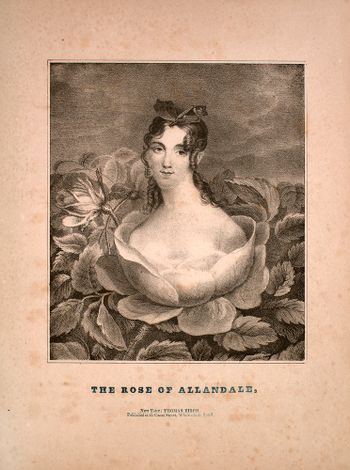 The morn was fair, the sky was clear, no breath came over the sea,
When Mary left her highland cot and wandered forth with me.
Though flowers decked the mountain side and fragrance filled the vale,
By far the sweetest flower there was the Rose of Allendale.

There is sometimes confusion of titles with J. Scott Skinner's “Rose Bud of Allenvale (The).”

See also listing at :
Jane Keefer's Folk Music Index; An Index to Recorded Sources [1]
Hear a version of the song by Andy Turner [2]

Back to Rose of Allandale (The)