Rose of Lucerne (The)

Back to Rose of Lucerne (The)

ROSE OF LUCERNE. AKA - "Swiss Toy Girl (The)." English, Air and Waltz (3/4 time). F Major (Manson): D Major (Kerr). Standard tuning (fiddle). AAB (Kerr): ABC (Manson). "The Rose of Lucerne" [Roud V388] or "The Swiss Toy Girl" was a song written by singer and composer John Barnett [1] (1802-1890) born in Bedford of German/Hungarian heritage. It was adapted from a traditional "Swiss" melody. At one point in his career he partnered with Harry Stoe van Dyk (1798-1828), who wrote the words to the song which was first published around 1823. An early copy appeared in the New York Mirror, and Ladies' Literary Gazette (1828, p. 408). Swiss music and dancing were in vogue in the 1820's and 1830's, when Swiss entertainers toured Europe and America, and the song can be found in songsters and similar collections through the mid-19th century. 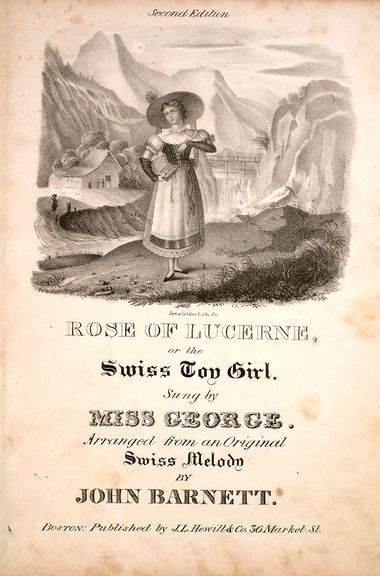 The tune is an adaption of a German folk song "Die Gedanken sind frei" which first appeared in print at the beginning of the 19th century, although thought to be older as the words to the song were issued on song-sheets about 1780. The German song has been a popular protest song against political repression and censorship and was proscribed in Nazi Germany. One night in 1942 Sophie Scholl played the song on her flute outside the walls of Ulm prison where her father Robert had been detained for calling Adolf Hitler a “Scourge of God”. Pete Seeger recorded the song in 1966 on his "Dangerous Songs!?" album.

Back to Rose of Lucerne (The)