Back to Rosemary Brown

ROSEMARY BROWN. English, Waltz (3/4 time). A Major. Standard tuning (fiddle). AB. Composed by the English ethno-musicologist, choreographer, dancer, musician and composer Pat Shuldham-Shaw (d. 1977). Shaw was a prolific composer of dances and tunes, many of which have been published. The melody, however, does not appear in his printed collections. 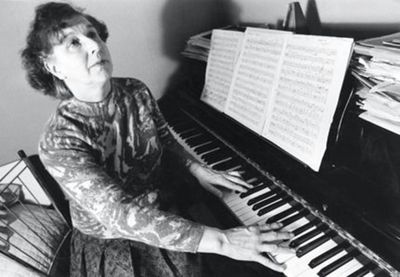 Rosemary Brown, who has died aged 85, was a modest, sincere and utterly genuine musical medium. While most mediums claiming to receive music extrasensorily from deceased composers do so through improvising at the piano, Rosemary's distinctive achievement lay in being able to write it down.

Her chief communicator was Franz Liszt; and even if some of the many other pieces from composers - including Chopin, Schubert, Debussy and Rachmaninov - are lightweight, the 1969 item called Grübelei (meditation), partly dictated under the watchful gaze of BBC reporter Peter Dorling and a television studio crew, is undoubtedly a most spectacular and unusual piece. It has strong harmonies, cross-rhythms and occasional instructions in French - a point conferring authenticity, but difficult to fake. The composer and Liszt specialist Humphrey Searle said: "We must be grateful to Mrs Brown for making it available to us."

Many distinguished pianists played Brown's inspired compositions, among them Peter Katin, Philip Gammon, Howard Shelley, Cristina Ortiz and John Lill. After meeting her in 1967 at Attingham Park adult education college, at the invitation of its warden Sir George Trevelyan, I wrote The Music Of Rosemary Brown (1978), and orchestrated music given to her by Beethoven, which was performed on Dutch television in 1976.

Rosemary also produced three volumes of autobiography and philosophical observations: Unfinished Symphonies (1971), Immortals At My Elbow (1974) and Look Beyond Today (1986). Basil Ramsey published many of her pieces in the 1970s, and Lissett Publications, of Canada, produced some volumes, Music From Other Spheres, from 1990 onwards.

Born in Stockwell, south-west London, Rosemary Dickeson was the daughter of an electrician and a catering manageress. Though her great love was dancing, when she left Rosa Bassett school, Streatham, at the age of 15, her father saw to it that she went to work for the Post Office.

During a wartime blackout in May 1940, she claimed that she heeded a voice advising her to avoid Balham high road on her way home from work, and so escaped a bombing raid that killed hundreds. Three years later, she contracted polio, but overcame it, and, in 1948, started taking piano lessons. In my view, the limitations of her training left her unfettered by too much formal apparatus, and so better placed to receive music from others.

Rosemary's father had died in 1944; in 1952, she married Charles Brown, a government scientist; but 1961 saw both his death and that of her mother. Rosemary was drawn to both spiritualist and New Age circles (where she met Trevelyan), and returned to the piano in 1964 after a work accident.

In the course of playing, she became aware of her hands being "taken over", so that she could produce new music by Liszt. As she told me, it could be a laborious process getting it onto paper, but she gradually became more adept at "taking dictation" from dead composers.

The first professional assessment of her growing body of posthumous pieces came from the Edinburgh music teacher Mary Firth. She was sufficiently convinced of its substance for her husband George to join Trevelyan in establishing a trust so that, from 1968, Rosemary could pursue her musical quest rather than her then day job as a school dinner-lady.

A year later came the BBC television interview that brought her a vastly greater audience. Public appearances took her around Europe, and to New York and the Johnny Carson Show; one of the more glamorous settings for her playing was on the Oscar Peterson television show.

Rosemary was quite unconcerned with the scepticism that inevitably followed from all this publicity: the main issue for her was survival, rather than the production of great music. Who, in any case, dare judge the quality if it is new? The aptly titled Revenant, received from Stravinsky in April 1972, a year after the composer had died, is a particularly intriguing example.

For many years, my family and I enjoyed the company of Rosemary and her son Thomas and daughter Georgina, who survive her. On one occasion, my first wife, Elizabeth, while sketching Rosemary, was thinking of Delacroix and his portrait of Chopin. Aware of Elizabeth's thoughts, Rosemary gave voice to her side of the mental dialogue: "Oh, I'm so sorry. I nearly said that in Chopin's accent. He's standing by me."

Back to Rosemary Brown