Find traditional instrumental music
This is the stable version, checked on 3 February 2020.
Jump to: navigation, search

Back to Rumbling Bridge (The)

RUMBLING BRIDGE, THE. Scottish, Reel (cut time). A Mixolydian. Standard tuning (fiddle). AAB. The melody appears in John and Andrew Gow’s A Collection of Slow Airs, Strathspeys and Reels (London, c. 1795). Andrew (1760-1803) and younger brother John (1764-1826) established a publishing business in London in 1788 and were the English distributors for the Gow family musical publications. The Rumbling Bridge [1] is located above a chasm on the Bran south-west of Dunkeld in Perth and Kinross, Scotland, and was originally built in 1713 by William Gray, a mason from Saline. A nearby hamlet takes its name from the structure. The bridge spanned a narrow gorge and the rushing water of the River Devon below makes a constant sound. Later, in 1816 (long after the Gow’s publication), there was a second bridge built on top of the first one, so that it is in effect a double bridge. This wider arch gave greater width to the road and removed the steep gradients down to the old bridge. 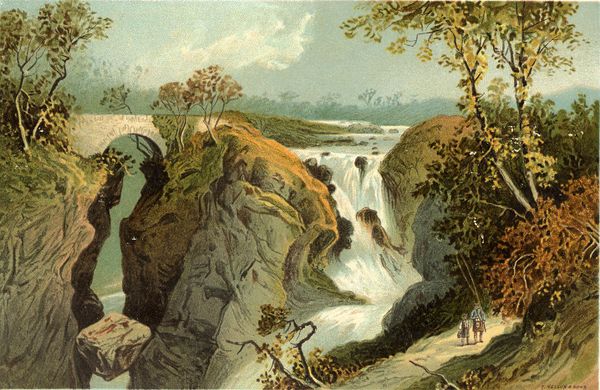 Dunkeld Cathedral and Rumbling Bridge, near Dunkeld, Perth, near the home of family scion Niel Gow.
The strathspey also appears under the "Rumbling Bridge" title in a small volume printed in Dublin by Edmund Lee entitled Mrs. Parker's Selection of Scotch Tunes, Strathspey and Reels (no date), which appears to be a reprint of a portion of the Gow volume.

Back to Rumbling Bridge (The)