Back to Run Mountain

RUN MOUNTAIN. Old-Time, Breakdown and Song. G Major. Standard tuning (fiddle). Most versions stem from western North Carolina fiddler Joseph Emmett "J.E." Mainer (1898-1971), who first recorded it in 1949 (with subsequent later recordings). Mainer did not claim to have composed it but rather said it was an old song he had heard, however, it does not seem to predate him. 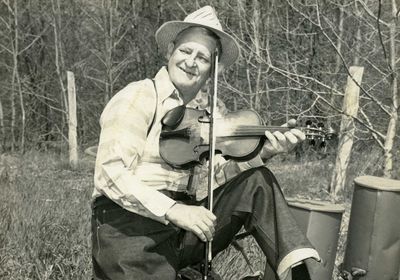 Went up on the mountain,
Give my horn a blow;
I thought I heard my true love say,
"That’s comin’ from my beau."

Mainer himself said the last part was “check a little hill,” meaning to investigate a hill, but his brother Wade thought it may have been a mishearing of “there’s sugar in the hill,” referring to the preparation of moonshine, according to Lyle Lofgren. At other times Mainer seems to sing "Chuck a little hill," but the chorus seems to have been a bit of nonsense without a specific meaning.

Back to Run Mountain