Back to Russian Rag 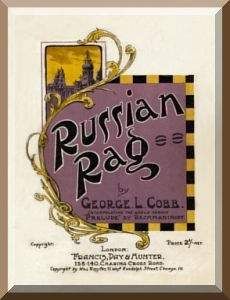 The "Russian Rag" was a widely popular 1918 adaptation by George L. Cobb [1] (1886-1942) of the opening theme of Sergei Rachmaninoff's Prelude in C-Sharp Minor. Cobb was born in upstate New York and was known for such popular songs as "Alabama Jubilee" and "Are You from Dixie?" as well as technically demanding piano rags. His "Russian Rag" was so successful that he followed it up with a "New Russian Rag."

Back to Russian Rag