Back to Saddle Old Paint

SADDLE OLD PAINT. Old-Time, Breakdown. USA, Ohio. G Minor. Standard tuning (fiddle). This unusual tune was in the repertoire of Forest Pick (1911-1979), a fiddler from West Portsmouth, southern Ohio, who said he had learned it from a full-blooded Cherokee Indian fiddler named Chief Red Bird who played dances in the area. The Native American fiddler may have taken his name from an earlier Chief Red Bird, who lived in the Kentucky/Ohio area prior to and for a time after the arrival of the first European settlers. The headwaters of the Red Bird River, near Beverly, Kentucky, is named for the historical Cherokee chief. Chief Red Bird and the Oklahoma Cowboys were entertainers, recording artists and radio performers in the 1930's, who toured the Midwest States. 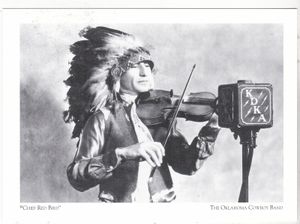 Chief Red Bird
Redbird's name was originally William A. Sanders, born in 1899 near Cherokee City, Arkansas, and who grew up in Indian Territory. He learned to play the fiddle, guitar, bass and banjo, and held several jobs before joining the group the Oklahoma Cowboys, including competing in calf roping events at rodeos, and playing semi-professional baseball as a pitcher. He and his brother Sam played music for square dances, including tunes "Danced All Night with a Bottle in My Hand" and "Old Judge Parker, Take the Shackles off of Me." He is quoted as saying:

I was playing them old tunes down at a television station, and the announcer said, "Chief, I bet you made a lot of money with that old fiddle." I said, "Well, quite a little bit." He said, "How much did you make on one setting?" So I said, "One setting, you mean? Well, let's see. It was me and my brother Sam, we was a-playin' for a country square dance, and we made nine hundred and five dollars apiece. "Nine hundred and five dollars apiece," he said, "That's a lot of money!" "Well, yeah, they paid us five dollars in cash and we had nine hundred dollars worth of fun."

After the Oklahoma Cowboys broke up, Sanders continued to play on the radio in Detroit and Cleveland as Chief Redbird and His Tribe, and then in a variety of groups, including an act with his family. After a lifetime of performing with modest success, he died in 1978.

Back to Saddle Old Paint