SADLER'S WELLS [1]. English, Country Dance Tune (6/4 time). D Minor. Standard tuning (fiddle). AABB (Raven): AABB' (Barnes). The melody with instructions for a country dance was published in The Third Volume of the Dancing Master, 2nd edition of 1726, published in London by John Young, who was heir to the Playford publishing concerns and who took over the Dancing Master series in the early 18th century. 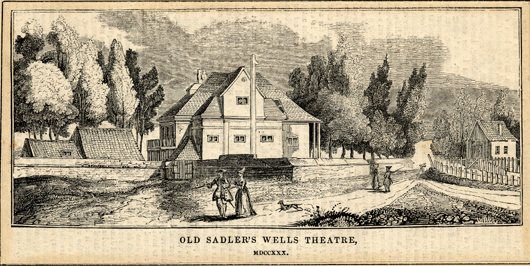 Sadlers Wells was a latter 17th and 18th century London pleasure garden located on the banks of the New River on the site of an old sanatorium. ”The well itself was a medicinal spring, once the property of the monks of Clerkenwell, reputed for its cures before the dissolution of the priory in Henry VIII’s reign, when this well was ordered to be stopped up as a relic of superstition. In the reign of Charles II., the house and grounds were in the hands of a surveyor of the highway named Sadler, who employed men to dig gravel in his garden, leading to the rediscovery of the well under an arch of stone. This happened in 1683. With great business tact, Mr. Sadler engaged a certain ‘T.G., Doctor of Physick’ to write A True and Exact Account of Sadler’s Well; or, the New Mineral Waters lately found at Islington, in which it was recommended as equal in virtue as that of Tunbridge. He built a music-house, and succeeded in making it ‘so frequented, that there are five or six hundred people there constantly every morning.’ After a few years the attraction ceased; but as a place of amusement it never failed in popularity” (R.L. Chambers, Book of Days, vol. 2, 1863). Charles Dickens (in Household Words, vol. 12, 1855) writes that pleasure gardens and music halls had to be licensed in London in the last half of the 18th century, a license that had to be renewed annually at the Middlesex quarter sessions (although theaters such as Drury Lane, Covent Garden and the Opera House were exempt, as they had special Crown-licenses). Not surprisingly, this limited the number of venues. Ones that were licensed were “Saddler’s Wells, which has since grown into a temple of Shakespeare; another was Bagnigge Wells; a third was Rannelagh; while others were Marybone Gardens, the Bell and the Angel at Edmonton, the King’s Head at Enfield, the Long Rooms at Hampsted, White Conduit House, Islington Spa, the Adam and Eve tea-garden, the Shepherd and Shepherdess, &c. Some of these had much celebrity in their day.” In all, there have been six theaters at Sadler's Wells, and it continues today as a theater venue, the second oldest continuous theater in London (after Theatre Royal, Drury Lane, which opened in 1663).