Sal Let Me Chew Your Rosin

Back to Sal Let Me Chew Your Rosin

SAL LET ME CHEW YOUR ROSIN (SOME). Old-Time, Song/tune (cut time). A Major. AEae tuning (fiddle). AABB. The piece, a combined song and breakdown, was first recorded by the North Georgia group Gid Tanner & His Skillet Lickers, featuring on this recording, along with showman Gid Tanner (1885-1960), guitarist and singer Riley Puckett (1894-1946) and fiddler Clayton McMichen (1900-1970). Banjo player Fate Norris and fiddler Lowe Stokes completed the line-up for this cut. John Minton, in his book 78 Blues: Folksongs and Phonographs in the American South (2008, p. 85), remarks: "Clayton McMichen and Riley Puckett treat the title character of 'Sal Let Me Chaw Your Rosin' as a personal acquaintance. As Puckett strums his guitar, McMichen declares: 'Uh Riley, lets go down to see old Sal, and see if she won’t give us a cud of that rosin to chew on this morning.' 'All right', agrees Puckett, 'we'll go down to the sweet gum tree and find out.' 'All right, and we’ll go down and play her a little tune called ‘Sal Let Me Chaw Your Rosin Some.'" 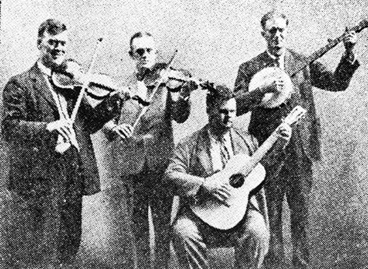 Sung (by Puckett) to the 1st strain:

Jump up Jinny, jump up Joe,
You never get to heaven ‘till you jump Jim Crow.

Cabbage in the garden, Peas in the gum,
Sal let me chaw your rosin some.

Hogs in the garden sifting sand,
Sal's in love with the hog-eyed man.

Cabbage in the garden, peas in the gum,
Sal let me chaw your rosin some.

Hogs in the garden sifting sand,
Sal's in love with the hog-eyed man.

Jump up Jinny and jump up Joe,
You never get to heaven (un)less you jump Jim Crow.

Researcher Guthrie Meade categorizes “Sal let me chaw/chew your rosin some” in the “Fire on the Mountain (1)” tune family, perhaps because of shared lyrics.

As it happens, rosin in one of its forms can be chewed. Esters of rosin are used as chewing gum bases for medicinal applications, and as a softener for recreational chewing gum. Cannabis can also be rendered in the form of rosin, although there is no evidence this is what is meant, nor does there seem particular support for a double-entendre title (as some would suggest). However, unprocessed pine rosin was at one time used recreationaly as chewing gum. These verses are from a 1922 poem called “Pine Rosin Chewing Gum” by Louise V. Boone[1]:

Chewing gum
was something we discovered
after we were grown,
and…the earlier generations—
the first thing
we had to chew
was pine rosin.
Well, when the pine has been wounded,
the sap will come out of it.
And we used to take those little balls
and chew it.
That was the first chewing gum
I’m sure
many a soul here in eastern Carolina ever had.
Had a pine taste.
Eventually
your teeth would become rather embroiled
in the whole thing.
And it got kind of stickly,
and you had to get rid of it
and find another wad.
But we loved to chew it,
and I’m sure we
were not the first generation
that did that.


See also listing at:
Jane Keefer’s Folk Music Index: An Index to Recorded Sources [1]
Hear The Skillet Lickers 1928 recording on youtube.com [2], at Slippery Hill [3], and at the Internet Archive [4]

Back to Sal Let Me Chew Your Rosin