Back to Salem Hornpipe

SALEM HORNPIPE. American, Hornpipe (2/4. G Major. Standard tuning (fiddle). AABB (Cole): AA'AA'BB (Phillips). Composition credited to one P.S. Gilmore in Ryan’s Mammoth Collection (1883). Patrick Sarsfield Gilmore [1] was a soldier, musician, a cornet virtuoso and brass band leader in the New York and Boston, Massachusetts, areas in the mid- and latter-19th century. Gilmore’s Band is one of the bands listed by The Boston Directory as headquartered at 103 Court Street, Boston, in 1865—the same address as Elias Howe’s music store (Sky, 2001). The title refers to the town of Salem, Massachusetts, where Gilmore was the leader of the Salem Brass Band, attached to the Salem Light Infantry, a militia unit. As young man he had been a blackface minstrel, after leaving the British army in Canada. Edward Le Roy Rice, in his book Monarchs of Minstrelsy (New York, 1911), gives this brief bio: 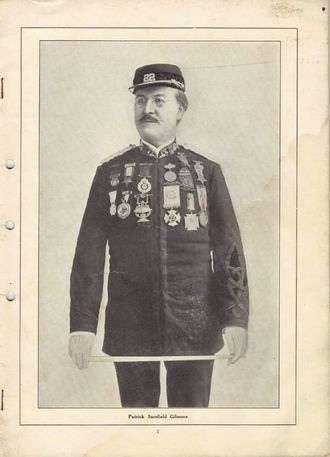 Gilmore came to the United States at the age of 20, and, rather than having been born “near Dublin” as Rice says, he was born in Ballygar, County Galway. He wrote the lyrics to "When Johnny comes Marching Home" while serving in the Union army in the Civil War, where he rose to the rank of Bandmaster-general. His most famous composition, according to many, was his band arrangement of “When Johnny Comes Marching Home” (published under the pen name of Lewis Lambert), which first appeared as part of “Soldier’s Return March (The).” At one time in his life Gilmore was famed as the impresario who led an orchestra of 1000, a choir of 10,000, and six bands in a huge 50,000 seat auditorium as part of the 1872 World Peach Jubilee and International Music Festival in Boston.

Back to Salem Hornpipe