Find traditional instrumental music
This is the stable version, checked on 19 August 2019.
Jump to: navigation, search

Back to Salisbury Craigs 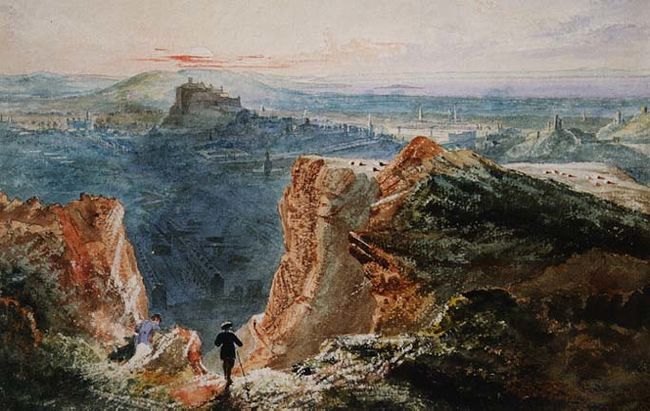 Salisbury Crags are a series of 46-metre (151 ft) cliffs at the top of a subsidiary spur of Arthur's Seat which rise on the west of Holyrood Park. Below the foot of the cliffs is a large and steep talus slope falling to the floor of Holyrood Park with a track known as the Radical Road running in the space between the two. This track was given its name after it was paved in the aftermath of the Radical War of 1820, using the labour of unemployed weavers from the west of Scotland at the suggestion of Walter Scott.

On the basis of it simply being the same name, Hugo Arnot derived the name from the first Earl of Salisbury who accompanied Edward III of England on one of his invasions of Scotland.[4] James Grant's view of this is that it was "an idle story" and quoted Lord Hailes' derivation from Anglo-Saxon meaning "waste or dry habitation".[5] The modern Gaelic name of the cliffs is Creagan Salisbury, a direct translation of the English; however in 1128, the cliffs were described in a charter under an older Gaelic name, Creag nam Marbh (the Crag of the Dead).

Back to Salisbury Craigs