SALLY ANN [2]. American, Reel (cut time). USA, western North Carolina. D Major. ADae tuning (fiddle). AABBCC. A very common Galax (Va.) area tune, though Bill Hicks (1972) notes that there are many versions of it played in the Galax/Mt. Airy area. In fact, there appears to be two distinct versions or strains of the tune, one characterized as the "Round Peak" version (named after the Round Peak, North Carolina, area south of Galax), and one typefied by the "Great Big Taters" versions (for which see "Sally Ann (1)"). Musician and folklorist Alice Gerrard tells this story: "Back when I first got to Galax it seemed like everybody in the country could play an instrument. I remember going to one auction sale and this fellow was standing there--he had just walked over from across the street and was watching the sale going on, and Wade Ward handed him his fiddle and said, 'Here, play us a tune.' And the guy said, 'I don't know how to play.' Uncle Wade told him, 'Well, play Sally Ann--there's not a man alive that can't play Sally Ann.' So the fellow played 'Sally Ann', and it wasn't bad! To this day I don't know who the fellow was." (Old Time Herald, vol. 3, No. 2, p. 30). Mt. Airy, N.C., fiddler Tommy Jarrell [1] (1901-1985) recalled the tune he learned from his father, fiddler Ben Jarrell, along with Tony Lowe and Charlie Lowe, an adaptation of the version he named "old-timey 'Sally Ann'. The newer version was rooted in the interplay between the ensemble playing of banjo and fiddle, rather than the more archaic solo fiddle style. Tommy learned the third part of the tune when he was about fourteen over the Virginia line, just north of where he lived in North Carolina, and brought it back to teach local musicians. 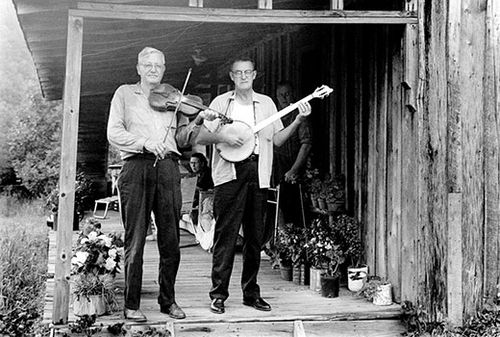 Sue's in the garden siftin' sand,
Sal's in bed with a hog-eyed man,
And I'm going home with Sally Ann,
Stay all night with Sally Ann.