Sally get Your Hoecake done

Back to Sally get Your Hoecake done

SALLY GET YOUR HOECAKE DONE. AKA - "Jenny/Jinny get Your Hoe Cake done." American, Air (whole time). G Major. Standard tuning (fiddle). One part. The title "Sally get Your Hoecake done" appears in a list of traditional Ozarks Mountains fiddle tunes compiled by musicologist/folklorist Vance Randolph, published in 1954. A play-party song called "Jinny get Your Hoe Cake done" was collected by John and Bess Lomax from the singing of Mike Stephens in Dallas, Texas, in 1940, and recorded for the Library of Congress (AFS 03946). The play-party song is a derivative of a blackface minstrel song by banjoist and minstrel performer Joel Walker Sweeney, first published on a songsheet published in New York in 1840. It was one of his signature songs. The first two stanzas go: 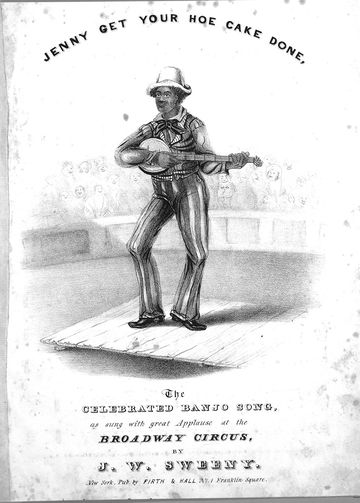 A hoecake, or Johnny-cake, was made of corn meal, water and salt cooked in a greased (usually with fat back) skillet. It was a quick and filling, if somewhat bland, foodstuff, but had the advantage of being extremely portable and could be prepared and cooked virtually anywhere with the rudest of utensils. The hoecake was a staple food of the 18th and 19th century traveler. It is traditionally held that 'hoecakes' were so-called because they actually at one time were cooked on hoes. The implements used in cotton fields were large and flat, and when the handle was removed and the hoe washed it made an excellent skillet. Cotton field workers would prepare hoecakes for the noon meal.

Back to Sally get Your Hoecake done