Find traditional instrumental music
This is the stable version, checked on 9 April 2020.
Jump to: navigation, search

Back to Sandy Cameron's (Strathspey) 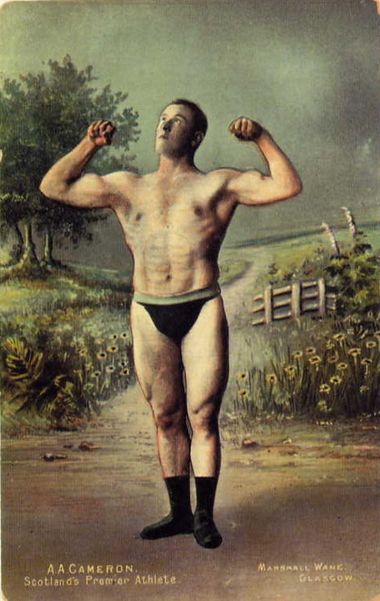 A.A. Cameron
Alexander Anthony (“A.A.” or “Sandy”) Cameron (1875–1951), The Mighty Mucomir, was a native of Dochanassie, Lochaber, Inverness-shire, near Fort William. His first love was farming (his nickname "Mighty Mucomir" stems from the Highland custom of naming a person from the property he owns), but he had a large frame, handsome physique and prodigious strength, and he soon gained fame at fairs, Highland games and other competitions where his feats of agility and strength were unparalleled prior to World War I. Cameron was enticed to tour several times, venturing as far as Australia, New Zealand, America and Russia, where he performed feats of strength on stage. In his prime he held 16 records, some still unbeaten at the time of his death at age 76, some thirty years after he had stopped competing.

Skinner recorded "Sandy Cameron" in 1910 in London with pianist Ethel Stuart, one of a series of Skinner recordings from that session heard by a young Donegal fiddler John Doherty, and added to his own repertory [1]. Skinner also later recorded the strathspey on 78 RPM towards the end of his life, in the 1920’s, and it was published (by Bayley & Ferguson on a single sheet [1]) both pipe and fiddle settings; subsequently it has entered both piping and fiddling repertory. Paul Stewart Cranford (2000) points out the Cape Breton versions tend to employ the ‘G’ natural and more cuts than do Scottish ones. The strathspey has sometimes been associated with composer Alex Cameron (1848–1923), who came from a famous Scottish piping family.

Back to Sandy Cameron's (Strathspey)