Scott's Lamentation for the Baron of Loughmoe

Find traditional instrumental music
This is the stable version, checked on 24 December 2020.
Jump to: navigation, search

Back to Scott's Lamentation for the Baron of Loughmoe

SCOTT'S LAMENTATION {FOR THE BARON OF LOUGHMORE} (Cumha Caoine an Albanaigh). Irish, Air (3/4 time). G Major. Standard tuning (fiddle). ABC. This hexatonic melody, which occurs twice in Edward Bunting's 1840 collection (with different basses) was noted from the playing of Denis Hempson, the last of the very old brass-strung harpers at the time of the Belfast Festival, "precisely as he learned it from Bridget O'Cahan. This specimen probably belongs to that highly finished school of performance which so much excited the admiration of Giraldus in the twelfth century." Bunting also said, "This is one of the Old Irish Lessons for the harp," and states that the composer of the air was a 16th century harper John Scott, a native of Co. Westmeath. The caoine, or lament, he explains, was a solemn piece of music, a tribute of respect to the deceased, and "the greatest test of the abilities of the harper." Caoine's were airs in three parts and were listening pieces, not intended to be sung. There apparently was no historical Baron of Loughmore, although Bunting identifies one Thomas Purcell, who died in either 1599 or 1607, as the self-styled Baron. O'Sullivan (1983) finds no record of any such Barony in Irish peerage records. However, Wikipedia gives information on the Barons of Loughmoe [1], and identifies the holding as a feudal barony located in northern Tipperary. The title (note that there is no ‘r’ in Loughmoe), it is suggested, was perhaps a Jacobite peerage, raised in 1690 while James II was in exile. 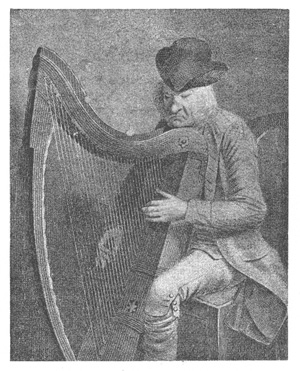 Back to Scott's Lamentation for the Baron of Loughmoe