SCUPS COME. AKA and see "Bennett's Favorite," "Great Eastern Reel (1)," "John Brennan's Reel (1)," "Grondeuse (1) (La)," "O'Byrne's Fancy," "Silver Spire (The)." Scottish, Reel (cut time). D Major. Standard tuning (fiddle). AABB. "Scups come" is a term fisherman once used to announce the coming of the migrating ocean fish called the scup or porgy [1]. The passage is from the Greencastle Herald, Greencastle, Putnam County, Indiana of the 29th of November, 1909, in a piece about the fisherman of New England and Long Island: "...the fisherman watch the dandelions. When the buds are swollen full and are ready to burst into bloom the fishermen rejoice and say. 'Now scups come!' and they put in their traps for this abundant, profitable and universally popular fish, for scup is the porgy of commerce." 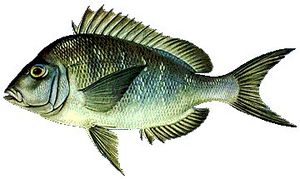 Scup or Porgy
Since the scup is found on the North American coast (from the Bay of Fundy to Florida, but primarily from Massachusetts to North Carolina), the title may indicate an American provenance for the tune.