Back to Seige of Belgrade (1) 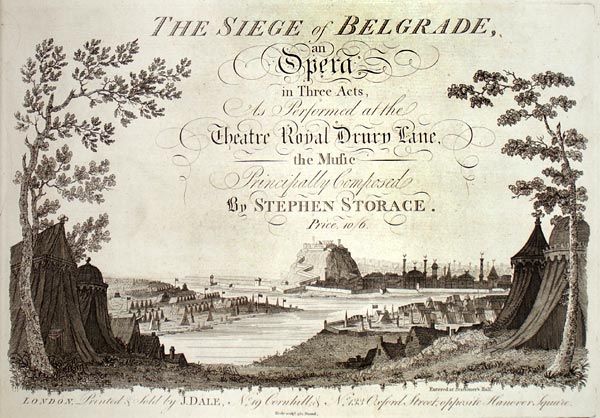 SEIGE OF BELGRADE [1]. English, Scottish; Country Dance Tune or Reel (2/4 time). B Flat Major (Watlen): D Major (Aird). Standard tuning (fiddle). AABB. The tune title refers to the opera Siege of Belgrade by British composer Stephen Storace, produced at the Drury Lane Theater in London on January, 1, 1791. Storace based his opera on Martin y Soler's Una cosa rara (1786), borrowing parts of the Spanish libretto (which was by Lorenzo Da Ponge), and adapting several of the musical numbers for his own opera. There was more than one Siege of Belgrade, but the event of the siege of Belgrade in 1717, in which Prince Eugene of Savoy conquered the Ottoman fortress of Belgrade, would still resonate with London theater audiences. It was the culminating conflict of the Austro-Venetian-Ottoman war (1714-1718), after the Austrian victory of Petrovaradin. The victory and the peace afterward secured for a generation a part of the Balkans for Austria at the expense of the Ottomans, although it was later won back under İvaz Mehmet Pasha. However, Storace's opera has nothing to do with that event, and it could have been set in any city in Europe with its themes of unrequited love and problems with true lovers getting together. There were Turkish and Austrian characters, however.

The reel was printed by John Watlen in his Celebrated Circus Tunes (1791, p. 22) with a note that it was "Perform'd by the Little Devil," referring to a performer named Master Giles. He was a young and talented member of the equestrian company of the Edinburgh circus during the 1791 season and was known as "The little Devil on Horseback."

Back to Seige of Belgrade (1)