Find traditional instrumental music
This is the stable version, checked on 26 June 2020.
Jump to: navigation, search

Back to Sergeant Early’s Jig

Free from professional jealousy, a proverbial affliction, he has been to the Union pipers America what the lamented Canon Goodman was to the pipers of Ireland a generation ago--their unfailing friend in distress. An expert at putting a demoralized set of pipes in order, he had no superior as a reed maker, and although he had no monopoly in this line of delicate workmanship, the difference between his dealings and that of some others was the difference between liberality and covetousness, or between candor and duplicity. [1]

Early often played in duet with fiddler John McFadden, originally from County Mayo. See the “Maid at the Spinning Wheel (The)” family of tunes. One of many variants appears in the Carl Hardebeck (1869-1945) collection under the title “Tune the Fiddle (2).” 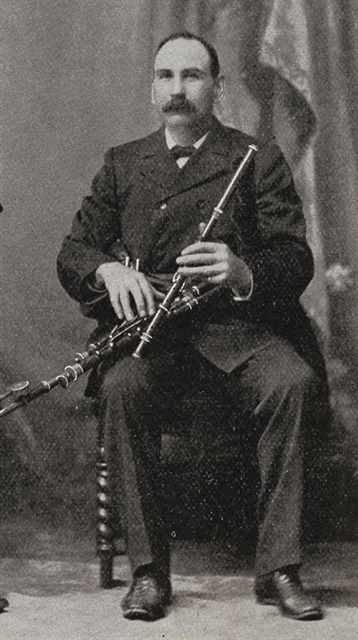 Sergeant James Early (c. 1840-1914, originally from near Carrigallen, County Leitrim, who joined the Chicago police force in 1874.
Researcher Fr. John Quinn identifies the several tunes in the tune family, beginning with "Serft. Early's Jig" (AKA "Sergeant Early's"). They include the jigs "Split the Whisker (The new)," "Second Cousin (The)," "Mountain Road (3) (The)," "Port an Achréidh," and "Garrett Barry's Jig" (AKA "Garrett Barry's Favourite"), as well as "Moving Bog (7) (The)" in duple-time and slide (12/8) versions.

Back to Sergeant Early’s Jig