Back to Seventh Regiment

SEVENTH REGIMENT. AKA and see “Flowing Tide (1) (The),” “Higgins' Best,” “Picnic Reel." American, Reel. A Major. Standard tuning (fiddle). AABB. Composition of the tune is credited to one Conn. Higgins[1] in Ryan’s/Cole’s. The melody appears in a hornpipe setting as “Higgins' Best” (probably a reference to its composer, the aforementioned Conn.) in O’Neill’s Music of Ireland (1903), and is well-known among Irish traditional musicians today as the hornpipe “Flowing Tide (1) (The).” However, the attribution to Higgins is belied by the tune's appearance in Providence fiddler and music teacher George Saunders violin tutor, published in 1847, wherein the same reel can be found as "Picnic Reel."

New York’s 7th Regiment was a mid-19th century militia to which New York’s upper-crust belonged, formed decades before the Civil War and headquartered at the old armory at the foot of 3rd Avenue. They were ready to serve when President Lincoln asked for emergency troops in 1861 to help defend Washington, although the 7th’s original commitment was brief (it must be said that at the time few foresaw the war developing into an extended conflict). When the troops marched down Broadway out of New York City in April, 1861, so many turned out to cheer them that the noise eclipsed the sound of the unit’s splendid regimental band. However, by June of that same year they were back in their home city, their initial commitment fulfilled. Nevertheless, many men from the 7th were commissioned and mustered into regular army units, and the 7th responded twice more during the war when called up. They were in line for the Gettysburg campaign in 1863 when the unit was hastily recalled to New York to help quell the huge draft riots that broke out. A period song parodied the rather brief dates of service of the regiment, penned by Albert F. Dawson (sung to the melody of the “Star Spangled Banner”). It concludes: 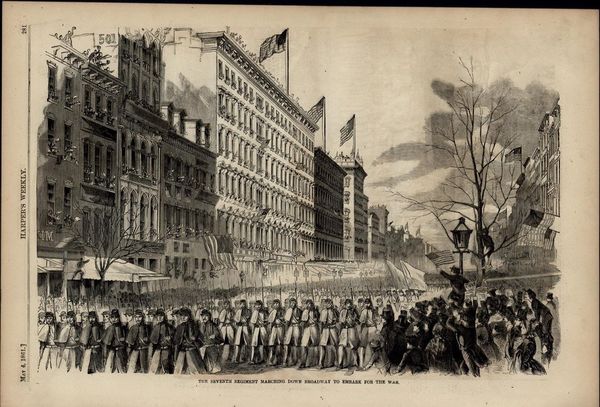 The 7th Regiment marching down Broadway, embarking for war.

'Tis true for our country
They went for to fight,
And offered their service
In proud manly manner,
They went for a month
Or longer to stay,
But soon they got home-sick
And had to surrender,
I think if they'd stayed
A better part they'd played,
But returned, when were wanting
And in time of their need
Foolish Seventh, foolish Seventh,
Your deeds cannot be praised,
By those who have homes,
In the land of the Brave.

The 7th Regiment had the fortune to have Claudio Grafulla lead its band for many years. Grafulla, born in 1810 on Minorca (off the coast of Spain), emigrated to the United States at age 28 and became a member of Lothiers Brass Band, a New York City organization. This band was attached to the 7th Regiment, although Grafulla subsequently became the director of the unit’s own 7th Regiment Band, which gained considerable fame. In 1860 Grafulla added woodwinds to a reorganized band and continued as director until his death in 1880.

Back to Seventh Regiment