Back to Sham Doctor (The) 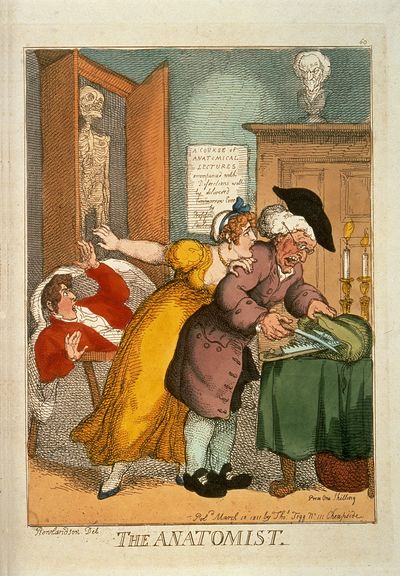 The Anatomist, by Thomas Rowlandson, c. 1811.
SHAM DOCTOR, THE. English, Triple Hornpipe and Country Dance Tune (3/2 time). B Flat Major. Standard tuning (fiddle). AABB. The tune was first published by London music publisher Henry Playford (1657-1709) in his additional pages to the Second Part (Part II) of the Dancing Master, 9th edition (categorized as edition 9C) of 1698. It was retained in the long-running series of Dancing Master editions through the 18th and final edition of 1718 (then published by John Young, heir to the Playford publishing concerns), and was also published by rival London music publisher John Walsh in his Compleat Country Dancing Master (editions of 1718 and 1747). Playford's country dance may have taken its name from Thomas Ravenscroft's two-act farce revolving around dissection called The Anatomist, or Sham Doctor, staged at Lincoln's Inn Fields in 1697, with music by Godfrey Finger. Finger was a native of Olmutz, Moravia, resident in London for many years where he was a prolific composer of vocal and instrumental music. He rose to become Chapel Master for James II in 1685.

Back to Sham Doctor (The)