Shepherds of Yarrow (The)

Find traditional instrumental music
This is the stable version, checked on 8 July 2019.
Jump to: navigation, search

Back to Shepherds of Yarrow (The)

SHEPHERDS OF YARROW, THE. Scottish, Slow Air (3/4 time). A Minor. Standard tuning (fiddle). AABB. The tune was claimed by cellist-composer James Oswald (1710-1769) in the index to his Caledonian Pocket Companion. Yarrow is a place and parish in the Scottish Borders in the former county of Selkirkshire, formed around the river valley of the Yarrow Water. Some sixty years following Oswald's publication Sir Walter Scott thought to sponsor a Borders sporting match: 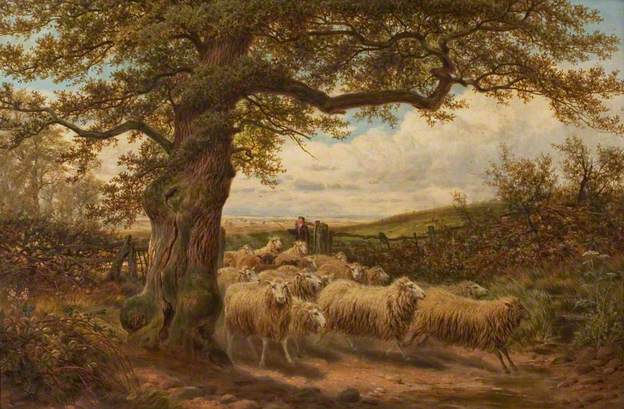 Sheep and Shepherd, by James Walsham

It was at Carterhaugh that the famous game of ball was played in 1815 between the shepherds of Yarrow wearing the heather, and the 'souters' or townsmen of Selkirk wearing twigs of pine. Sir Walter Scott took the liveliest interest in getting up the contest. A party of distinguished persons came to witness it, and the banner of Buccleuch, which had not been unfurled for nearly two hundred years, was borne about the field at the opening of the game by Sir Walter's son. Unfortunately the Selkirk men thought they were not fairly treated and the game, which began with so much enthusiasm and mirth, resulted in a deep and prolonged ill-feeling between the routers and the shepherds, which all Sir Walter's efforts, combined with his great popularity, could not quite allay.[1]

Back to Shepherds of Yarrow (The)