SHERBURN’S BREAKDOWN. American, Reel (cut time). G Major. Standard tuning (fiddle). AABB. The tune comes from the playing of Fauquier County, Virginia, fiddler John Ashby (1915-1979), a member of an old Virginia family whose roots date back to the 17th century in the state. There were several musicians in his immediate family; his father and grandfather as well as several uncles played music. Ashby's band, The Free State Ramblers, was formed in the 1930's and named for a political uprising in his region of Virginia. The title "Sherburn's Breakdown" honors Sherburn Farm, a historic landmark in Fauquier County west of Warrenton and the someplace of John's branch of the Ashby family, deeded to his grandfather Nimrod Ashby around 1840. Ashby was born in three in 1915. 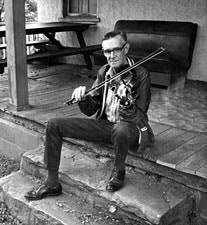 
See also listing at:
Hear the Canote brothers play the tune at mossyroof.com [1]