Find traditional instrumental music
This is the stable version, checked on 9 August 2019.
Jump to: navigation, search

Back to Shoo Fly

SHOO FLY. AKA - "Shew fly, don't bother me." American, Reel and Air (cut time). USA; widely known. D Major. Standard tuning (fiddle). AABB (Phillips, Silberberg): AA’BB’ (Songer). The original “Shew Fly, Don’t Bother Me” was a “Comic Song and Dance, or Walk Round” (as the sheet music explained) hit for Billy Reeves (words) and Frank Campbell (music) who are often credited with the composition. The songwriting pair were blackface minstrels and claimed the tune, although it has been pointed out that the reference to ‘Company G’ in some song versions suggests Civil War origins. However, a competing and perhaps stronger claims is made for "Shew fly don't bother me" as the work of Thomas Brigham Bishop, who hailed from the village of Wayne, Maine. By his own account, he wrote the song during the Civil War while assigned to command a company of black soldiers. He overheard a casual conversation in which one soldier dismissed the remarks of his fellow soldiers, saying "Shoo fly, don't bother me" to indicate his disdain. This was all the inspiration Bishop needed to fashion a song (in which he included the designation of the unit, Company 'G'). It became almost immediately popular and several versions were published about the same time. Bishop published his in 1869, rather too late, and tried to recapture his claim by proclaiming that his published sheet music was the "Original Copy and Only Authorized Edition." It retained its popularity over the years and was assumed into Americana, especially (and later) as a children's song. 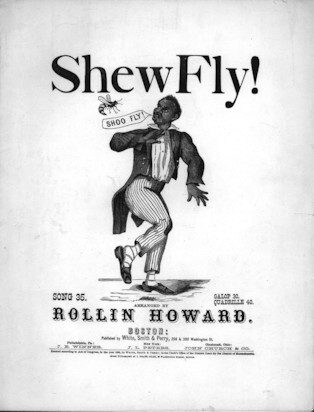 I went down to Shoe-fly's house,
Shoe-fly wasn't home;
I ate up all the meat and bread,
And fed that dog a bone.

Chorus:
Shoe-fly, shoe-fly, don't you bother me,
Stay away from here shoe-fly, I'm as drunk as I can be.

Apple-jack, mollasses,
And lots of cornbread too;
If anyone can handle that,
It's more than I can do.

or:
Little cat pour molasses,
Upon that big cat's head.

Back to Shoo Fly