Find traditional instrumental music
This is the stable version, checked on 20 February 2022.
Jump to: navigation, search

Back to Shoot Two Bits

SHOOT TWO BITS. AKA - "Two Bits." American, Reel (2/4 or cut time). USA; Iowa, Nebraska, Missouri. D Major. Standard tuning (fiddle). AABB. 'Two bits' is a colloquial term for a quarter, though not in common use in modern times. It refers to a time when coinage, particularly silver dollars, could be physically broken up into pie-shaped parts and used as legal tender (the "pirate" term "pieces of eight" derives from the same use). 'Shoot two-bits', however, was a term for a wager in dice games, though with various meanings. 'Shoot two bits' could refer to a game with very low wagers, as it was used by writer Ian Fleming in his Diamonds are Forever:

But the killer was extended the liberty of the place as long as he paid off and held an intrest in a local institution. It could be a house of prostitution or a backroom crap game where the busted could shoot two bits.

One could also shoot a nickel or dime. Alternatively, 'two-bits' could also refer colloquially to twenty-five dollars ($25.00), as employed by writer Daschell Hammett in The Glass Key:

Harry Sloss picked up the dice and rattled them in a pale broad hairy hand. "Shoot two bits," He dropped a twenty-dollar bill and a five-dollar bill on the table. 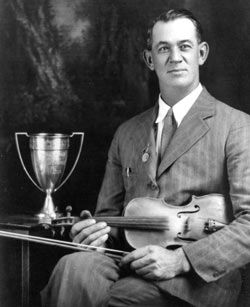 Bob Walters
Collector Bob Christeson remarked that his source for the tune, champion Nebraska fiddler Bob Walters (1889-1960) credited the tune to Oscar Doty, "a retiree in Missouri Valley, Iowa. Mr. Doty had a high-priced violin he had acquired from a member of the Omaha Symphony, and he played it in 1951 at the annual get-together for fiddlers sponsored by Mr. Frame Davis in Des Moines, Iowa."

The second strain begins similarly to that of Walters' own "Bob Walter's Hornpipe."


Back to Shoot Two Bits