Find traditional instrumental music
This is the stable version, checked on 29 May 2020.
Jump to: navigation, search

Back to Sid Harkreader's Tune 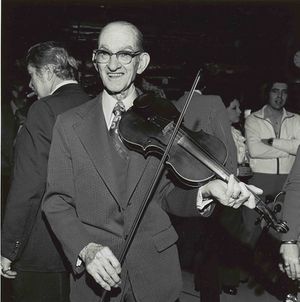 Gelatin silver print by Henry Horenstein, "Fiddlin' Sid Harkreader."
SID HARKREADER'S TUNE. American, Reel (cut time). G Major. Standard tuning (fiddle). AAB. This untitled, irregular (10 measures in the second strain), reel was the first in a set of two tunes played by banjoist and singer Uncle Dave Macon and fiddler Sid Harkreader (1898-1988, Gladeville, Tennessee), preceding "The Girl I Left Behind Me." Having no name, the tune is called after the fiddler. On the recording Macon vocalizes dance calls occasionally behind the melody, but they seem random calls and not actually a formatted dance figures. Harkreader's phrasing on the melody is unusual. While the whole tune has been transcribed in cut time, the phrasing often makes more sense with measures of 5/4 in the beginning and 3/4 at the end.

Back to Sid Harkreader's Tune