Back to Silly Bill

SILLY BILL. American, Breakdown and Song. USA, southwestern Va. F Major (Charlie Higgins): G Major (Al Hopkins). Standard tuning (fiddle). AA'BB'. "Silly Bill" was a popular comic stage song appearing under the title “Altogether Green (or ‘I Rather Think I Will’)” dating from the year 1856. Silly Bill was also a mid-19th century name for a clown, an entertainer who could be found at fairs and in street performances, and who played the stooge for another comic character. Perhaps propelled by the alliteration ("Silly Billy") the term became generalized to mean a foolish person. The tune was a Galax, Va., regional favorite, but the song (sung to various airs) enjoyed widespread popularity in the late 19th and early 20th century, and has been collected from Mississippi to Michigan. The song/breakdown “Silly Bill” (backed with “Old Time Cinda”) was recorded in New York for Okeh Records on January 15, 1925 by an un-named string band of musicians from the upper South led by fiddler Al Hopkins (1889-1932). According to Mark Green, when Ralph Peer (OKeh’s man running the recording session) asked for the groups’ name, Hopkins is said to have replied something like, ‘We’re nothing but a bunch of hillbillies from North Carolina and Virginia. Call us anything.” The record was issued as “Vocal chorus by Al Hopkins/The Hill Billies,” the first use of the term in association with old-time music [1]. Hopkins' group also recorded under the name Al Hopkins and His Buckle Busters, as they did for this piece. The song is sometimes called "Hardly Think I Will" [2]. The Buckle Busters sang: 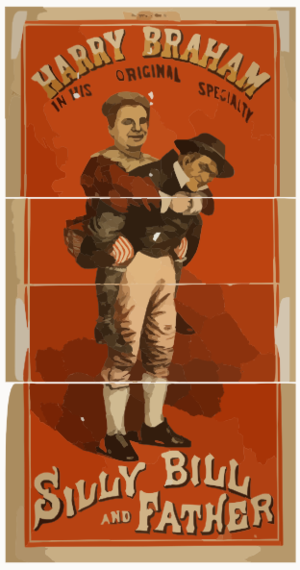 Old Bill, poor Bill, poor old Silly Bill.
He wishes me to marry him, but I hardly think I will.

Silliest fellow, fellow I've ever seen;
He's neither black or yellow, but he's altogether green.
His name is not prince charming, he's only simple Bill;
He wishes me to marry him, but I hardly think I will.

He thinks it would be very nice to go strolling down the hill;
Hand in hand together, but I hardly think I will.
Last night he came to see me, he made to longer stay;
And I thought to myself the blockhead will never go away.

He told me of his cottage, his cottage among the trees;
And don't you know that fellow got down upon his knees
The tears that fellow wasted would probably turn a mill;
He wishes me to marry him, but I hardly think I will.

Back to Silly Bill