Find traditional instrumental music
This is the stable version, checked on 24 September 2019.
Jump to: navigation, search

Back to Sir Alexander Don (1) 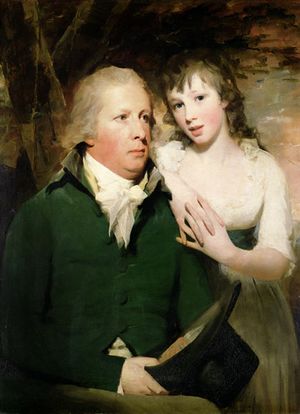 Sir Alexander Don with his daughter Elizabeth. Henry Raeburn (1756-1823)
Sir Alexander Don, 5th Baronet, of Newton-Don, Berwickshire, was born in 1751 and died in 1815. He married in 1778 the ‘divine’ Lady Harriet (Henrietta Cunningham), sister of the Earl of Glencairn, a patron of the poet Robert Burns. The couple’s two daughters died of accidental drowning in 1793, but a son survived to take the title upon his father’s death. A grandson, William Don, however, left the army deeply in debt, and had to part with what remained of the estate. He became a well-known actor and died in 1861 in Australia, where he was touring with a company. In the 1790’s in response to the growing threat from post-revolutionary France, local fencible regiments for home defence sprang up, and, like many of the gentry, Sir Alexander formed a unit. It was called the Berwickshire Fencible Calvary, and he served as Colonel during the five years of its existence. Sir Alexander was a sporting man; when the Kelso races began in earnest in the 1760’s, he sponsored competitors, and his horse Cheviot won a famous race there in 1765.

The melody “Caledonian Hunt (1) (The)” was composed by Alexander Don, who, along with other gentry, formed the Caledonian Hunt society whose annual ball was the event of the year among the Scottish aristocracy of his era. Sir Alexander even presented Nathaniel Gow (whose band often provided the music for the ball) with a valuable Italian violin, in admiration of Gow’s music. Variation sets for “Miss Ketty Hall” are also attributed to him (and Nisbet of Dirleton).

Back to Sir Alexander Don (1)