Find traditional instrumental music
This is the stable version, checked on 19 September 2019.
Jump to: navigation, search

Back to Sir Cecil Wray's Delight 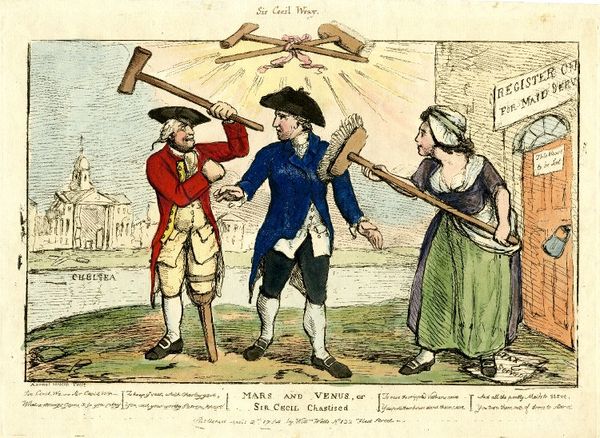 Sir Cecil Wray stands between a Chelsea pensioner (left), who threatens him with a crutch and a clenched fist, and a servant-maid (right), who threatens him with a broom. Wray, hands deprecatingly outstretched, turns his head in profile towards the furious pensioner, who has a wooden leg and a bandaged eye. The maid stands on a paper inscribed 'Tax on Servants'; close behind her (right) is a door over which is inscribed 'Register Off [ice] for Maid Serv[ants]'. The door is padlocked and placarded, 'This House to be Let'.Behind is the river with the façade of 'Chelsea' Hospital falling in ruins. In the centre, above Wray's head, a broom and crutch, tied with ribbon, are irradiated. Beneath the design is etched:'Sir Cecil Wr------Sir Cecil Wr------What a strange game it is you play To keep y seat which Charley gave, You call your worthy Patron knave! To ease the crippled Vet'rans cares You pull their home about their ears And all the pretty Maids to sarve, You turn them out of doors to starve.' [British Museum]
SIR CECIL WRAY'S DELIGHT. English, Country Dance Tune and Jig (6/8 time). D Major. Standard tuning (fiddle). Sir Cecil Wray [1], 13th Baronet Wray of Glentworth, was born in 1734 into an ancient Lincolnshire family. A few months prior to this 18th birthday, in 1752, his father died and he inherited the title and the family stated in Lincolnshire, Norfolk and Yorkshire. He was elected in 1768 to Parliament as a Whig representing Retford in Nottinghamshire, and then for Westminster from 1782 to 1784. In the latter period he stood in the House of Commons to oppose Charles James Fox and the East India Bill, and denounced Fox and his coalition with Lord North. Switching allegiance to the Tory party, and with their assistance, Sir Cecil tried to oust Fox from representing Westminster in 1784. He came in third in the election, behind Fox and the winner, Samuel Hood, but he contested it for the better part of a year before desisting. Afterwards he was much ridiculed in the press and in popular culture, as his aptitude was questioned (he was noted to have agreeable manners, but lacked 'superior talents'). He was said to have been parsimonious; he drank 'small beer', and the ‘unfinished state of his newly fronted house in Pall Mall’ was sneered at.

Prior to his career in politics Sir Cecil made an unfortunate decision to demolish ancient Roman ruins in Lincoln, some of the last of their kind. He built a house on Eastgate, to the northeast of the Cathedral, called Eastgate House, and extended it in 1763. The ancient ruins--the remains of the Roman Upper East Gate to the city--obstructed his view of Lincoln Cathedral, however, and he had them demolished.

Back to Sir Cecil Wray's Delight