Find traditional instrumental music
This is the stable version, checked on 24 September 2019.
Jump to: navigation, search

Back to Sir George Ramsay's Lament 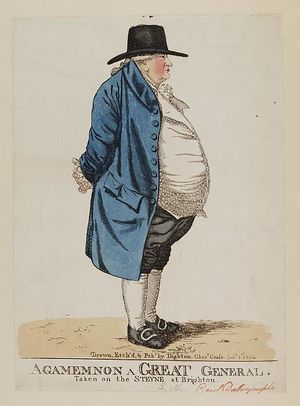 Col. William Dalrymple
SIR GEORGE RAMSAY'S LAMENT. Scottish, Slow Air (cut time). A Major. Standard tuning (fiddle). AA'BBCCD. John Watlen, in his 1791 collection of tunes from the Edinburgh circus, credits "Sir George Ramsay's Lament" to "Miss C. Dal____e". Caroline Dalrymple was one of the daughters of Col. William Dalrymple of Fordel, a retired army officer (his troops were involved with the Boston Massacre). The title refers to another army officer, Sir George Ramsay, 9th of Dalhousie (1770–1838). In 1816 he was appointed Lieutenant-governor of Nova Scotia, and in 1820 was promoted to Governor-general, at which time he moved to Quebec. His tenure was a failure, as he was unable to manage the tensions between and English administration and French-Canadian legislature, and his rigid and elitist personality made it particularly difficult for him to succeed. In 1828 the London government transferred him to a military command in India. Well-meaning and energetic, Dalhousie lacked the political skills needed to cope with the challenges of an increasingly volatile British North America.

Edinburgh musician and dancing master Alexander Gibb issued A New Collection of Minuets, Medlies, High Dances, Marches, Strathspey and other Reels With Entertaining Tunes &c. in 1798 and dedicated it to Miss C. Dalrymple. Alexander Gibb was from Haddington; John Glen finds that one of his advertisements reported 'that he had not been to Paris this year, but that he had as many modern dances, and fashionable reel and country dance steps, as any of his line in the town.'

Back to Sir George Ramsay's Lament