Find traditional instrumental music
This is the stable version, checked on 25 September 2019.
Jump to: navigation, search

Back to Sir John Henderson's Jig 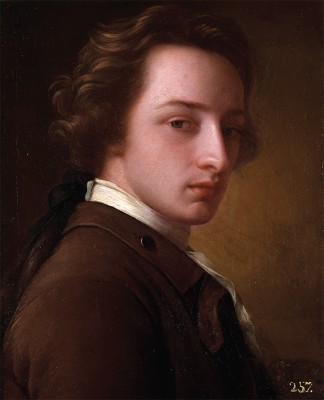 File:Sir John Henderson, 5th Bart. of Fordell, by Gavin Hamilton, 1778
SIR JOHN HENDERSON'S JIGG. Scottish, Jig (6/8. G Major. Standard tuning (fiddle). AAB (Gow): AABB' (Knowles). Composed by renowned Perthshire fiddler-composer Niel Gow (1727-1807), probably for Sir John Henderson, 5th Baronet or Fordell in the County of Fife. His seat was Fordell House, built in 1721 as a family residence for the Hendersons (it was demolished in 1963). He sat as a Member of Parliament for Fifeshire, Kirkcaldy Burghs, Seaford and Stirling Burghs, and also set to making improvements in Fife. St. David’s harbour was built in 1752 to accommodate deeper draft vessels in service of the coal industry, and not incidentally his own private coal company. As the nearby coal seams became depleted coal was mined deeper and further, and Henderson built one of the first railways to assist in transporting the coal to the harbour, although made at first from beech and firwood, with trucks drawn by horses. The miners, however, lived little better than serfs, having been excluded by the Habeas Corpus Act of 1701. When told by Henderson that the new Act of 1790 no longer bound them in servitude, the news was cheered and celebrations took place in the form of a Gala Day.

Back to Sir John Henderson's Jig