Find traditional instrumental music
This is the stable version, checked on 22 October 2019.
Jump to: navigation, search

Back to Sir John Sinclair

SIR JOHN SINCLAIR. Scottish, Air (whole time). F Dorian. Standard tuning (fiddle). AABB. "Very ancient” (Gow). There have been many Sir John Sinclairs in Scottish history, and since Gow labels the tune “very ancient” it is supposed that it referred to a prior Sir John. However, the Sir John Sinclair (of Ulbster, 1754-1835) of Gow’s time was a famous Member of Parliament for Caithness at Westminster, and a man of great intelligence and productivity. He is depicted below by the famous artist Henry Raeburn, probably in his uniform as Colonel of the Caithness and Rothesay Fencibles, a local Highland unit raised for defense during the Wars with France. He was an improver, statistician, agriculturist, ambassador and politician and his public laurels included presidencies of the Highland Society and of the Board of Agriculture and Privy Councillor. 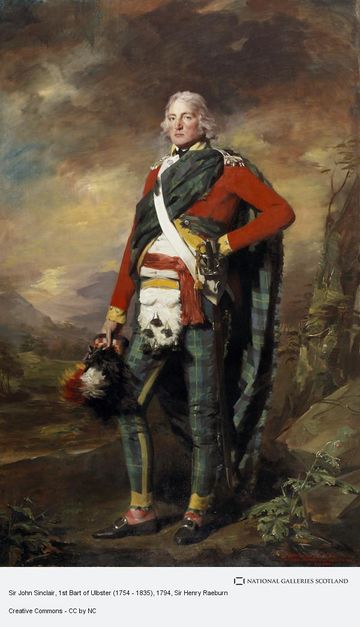 Back to Sir John Sinclair