Find traditional instrumental music
This is the stable version, checked on 8 September 2020.
Jump to: navigation, search

Back to Sir John Whitefoord's Strathspey 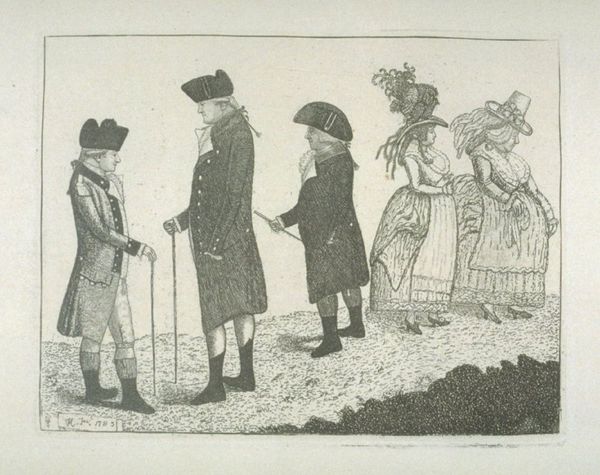 One of John Kay's caricatures of Edinburgh personages. Depicted are Major Andrew Fraser, an engineer, Andrew Erskine, a writer, and Sir John Whitefoord, patron of Robbie Burns. The women are Meg Murray and Miss Burns, a celebrated beauty.

SIR JOHN WHITEFORD. Scottish, Strathspey. E Flat Major. Standard tuning (fiddle). AAB (Aird, Gow): AABCCD (Campbell). Composed by Nathaniel Gow. Sir John Whiteford (or Whitefoord), 3rd Bart. of Blairqhahan, born 1734, was a major in the 11th Foot Regiment and was described (by John Kay in Edinburgh Portraits) as “a remarkably smart, active little man.” He was a Freemason, Master of Lodge St. James (Tarbolton, Ayrshire), and in 1766 became Senior Grand Warden of Scotland; he was also known as an agricultural improver. Whiteford had a love of literature was an early patron of Scots poet Robert Burns, a fellow Mason, to whom the poet remained grateful. It was Whiteford, along with a near neighbour, the Earl of Glencairn, who helped Burns to publish his first collection of poems, the Kilmarnock Edition (1786). Whiteford House in the Canongate, designed by architect Robert Mylne in 1769, was his Edinburgh residence although he had acquired the Ayrshire estate of Ballochmyle in 1766. Unfortunately, Whiteford invested heavily in an Ayrshire bank that failed in 1772, and by 1786 he was forced to sell the latter property. Robert Burns penned the song “Farewell to Ballochmyle,” also called “The Braes of Ballochmyle” (a part of the wooded bank of the River Ayr) when they left, employing Whiteford’s daughter Mary Jane as the heroine of the piece (“I composed the verses on the amiable and excellent family of Whitefoord leaving Ballochmyle. The ‘Maria’ referred to in the song was Sir John’s daughter, Mary Anne Whitefoord.”). Whiteford died in 1803.

Back to Sir John Whitefoord's Strathspey